A Secret Garden No More

I remember being at a conference for work and watching two of my male colleagues off in a corner with their phones out, happily discussing some new app one of them had acquired. They were there for a while, comparing one app to another like boys with their baseball cards.

That will never be me. I rarely add anything to my phone since it’s used mostly for phoning (imagine that!), texting, or checking email.

But!    I have a new app that is nothing short of magical. There are probably others that are similar, but today I downloaded “Picture This” for free (dodging their attempts to make me subscribe) and have been on a discovery tour of my garden. The absolutely incredible thing about this app is you aim your phone at any plant, take its picture, and the app tells you what it is. Magical.

I’ve made lists of what’s in my garden, taken pictures of things when they’re blooming, and yet I still have things appear that are a mystery. I also inherited several plants from the previous owner of our unit, and after four years still had no idea what they are. At our house I would ask my patient neighbor Nancy (a very skilled gardener) to come over and tell my what I had. I would then forget and next year do it all over again. Then we moved and I doubt if even patient Nancy wants to drive across town to humor me. 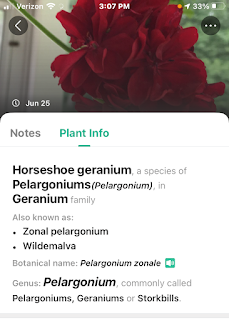 I began with a geranium on my porch just to see how it worked.

I then went out and worked my way through plants known and unknown.

There was good news and bad news. The Bee Balm has rallied and looks promising, but the volunteer in the back garden is apparently Mugwort. 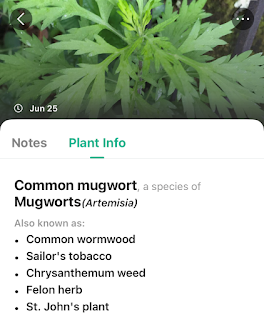 Not a character from Harry Potter, but an invasive weed that even though it’s in the Artemisia family has little to recommend it.

Oh, and the neat row in the back of my garden is not something I planted after all. It’s the unlovely Ragweed, aka Fireweed, and even better, Thickhead. Sounds like its next venue will be the compost heap. 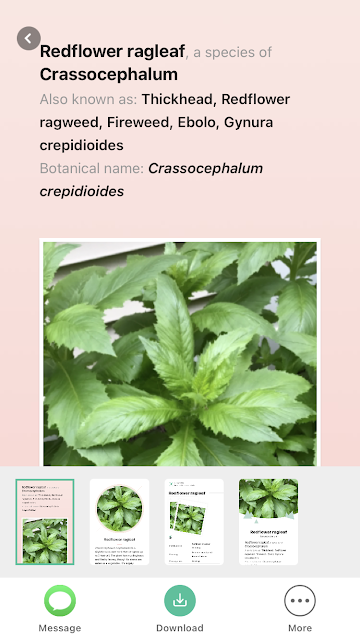