A few weeks ago, our first attempt with a Florida dog groomer was not an encouraging experience. It was off-putting enough to find hair on the floor, dogs barking, and the owner making conversation as she trimmed a dog.  And the girl checking us in kept referring to Mamie cloyingly as “Baby.”


I’ve made an executive decision. It happened at the time of day that life-altering epiphanies usually arrive – when I was lying in bed unable to sleep.

Email ThisBlogThis!Share to TwitterShare to FacebookShare to Pinterest
Labels: Florida


. . . . goulies and ghosties and long-leggedy beasties
And things that go bump in the night. . .

We’re still adjusting to life here in the commune. After years and years and years of living in a house, we’re used to hearing water run and knowing who flushed. Now we have two floors above us, and in spite of having two feet of concrete between us and our neighbors, sound still manages to travel.
One night last week I woke at 3:30 a.m. to Mamie, usually the most silent dog on the planet, barking her head off. This was immediately followed by pounding feet running upstairs.  I made it to a front window just in time to see a car in front of the building, motor running, passenger door open, and a young woman sprinting toward it.
Robbery? Family drama?
The next morning I asked the woman on one side of us if she’d heard anything. Nope.
I asked the woman two doors down if she’d heard anything. Nope.
Later in the day I asked the neighbor next door if he’d heard anything. Nope. But as a year-round resident he’s also sort of the mayor of our building and has keys to many of our places so he can check to make sure we don’t come back to ugly surprises. Nobody had arrived yet at the units above us so he said he’d go upstairs and take a look.
When I saw him the next day he said the doors had been locked and nothing looked disturbed.
Huh. The next night I thought twice about leaving our window unlocked, but I slept soundly, undisturbed.
Days went by and the upstairs neighbors arrived, followed by their three granddaughters in the 7 to 13 age range. In person they look sedate enough, but once in their grandparents’ condo they must strap on hobnail boots and while away the hours moving furniture. The first night they were there I woke again to running footsteps at 3:30, but attributed it to the heavy-hoofed kids above us.
The soundproofing between units is excellent, but our concrete block and iron buildings carry percussive sounds so effectively they’d be perfect should we ever find ourselves duck-taped by evil-dooers and forced to tap out a cry for help in Morse code.
Yesterday we had our annual condo meeting, and after discussions about landscaping, building color, water bills, and non-working street lights, the grandfather from upstairs raised a tentative hand.
He asked, “Has anyone else heard running at 3 in the morning?”
He was answered by puzzled and affirmative head-noddings.
So, I thought, that latest pre-dawn clomping hadn’t come from his family after all. .
Then from in the back of the room someone called out, “Oh, that’s the paper delivery.”


My Uncle Sam had polio as a child and was bedridden with it for several years. After several operations and lots of physical therapy he eventually walked, but it was probably during those years that he became such a proficient knitter – what could you do with a kid in bed in the thirties with no TV? – and all that reading paved the way for him becoming a distinguished and published English professor.


Putting on new sheets today reminded me of how adept Mama said Granny became at changing the bed with Uncle Sam still in it. 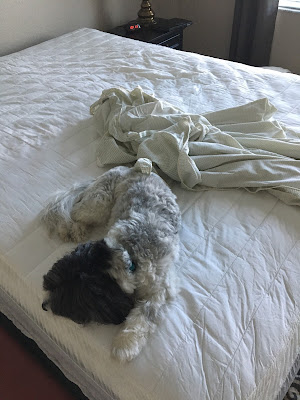 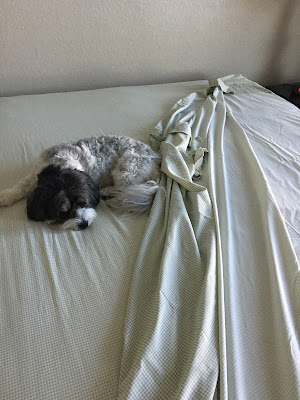 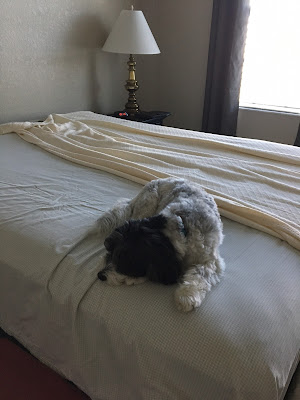 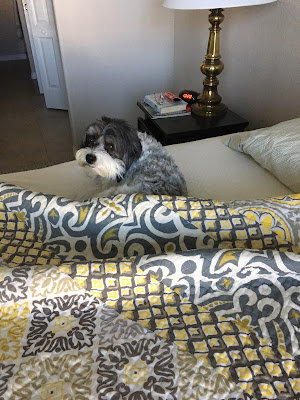 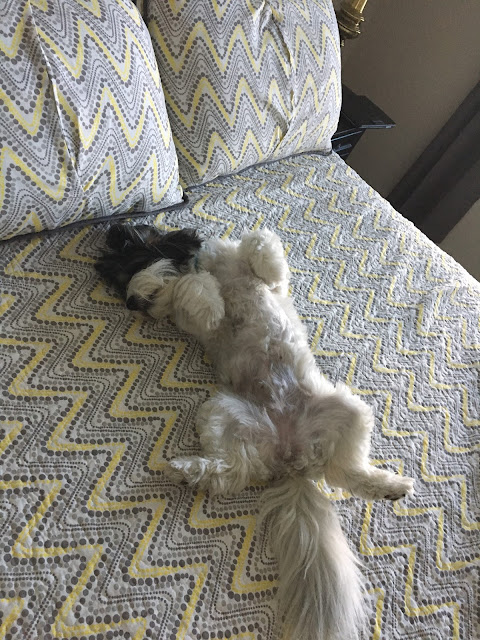 On a Happier Note

We went to the Sarasota outdoor arts showcase yesterday and wandered around from booth to booth admiring things we'd never considering buying, let alone bringing into our house, and others that we'd love, love to have but could never afford. We came away empty-handed, but got a nice lunch out of the day.

We exited the restaurant at the same time as a woman who'd been sitting nearby with the fluffiest dog I'd ever seen. You could have attached a broom handle to it and cleared out every dust bunny in your house.  Curious, we asked what kind of breed it was and were dumbfounded to learn that it was a Coton de Tulear, the same breed as our dog. 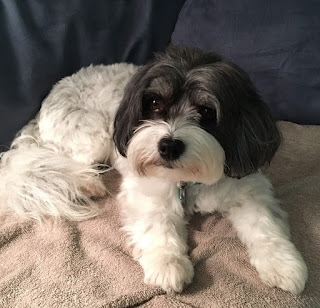 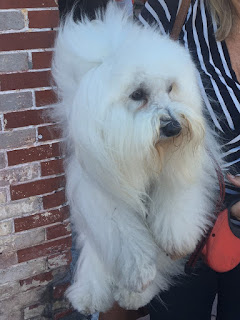 Mamie's family tree is documented back to both sets of grandparents, but I don't think she'll ever look this aristocratic - mainly because I don't intend to spend every waking hour with a dog brush in my hand.
It was comforting to see that this meticulously groomed dog had the same grubby whiskers as my own little snuffler.


Four years ago, I was semi-newly retired and still sorting through what to do now that I was no longer starting my day at 6:45 in a high school classroom.

I knew that being in Florida would feel very different from slogging through the winter in Massachusetts. This weekend, though, I passed through so many alternate dimensions I might as well have been in an old episode of Star Trek.

Fear and (Self) Loathing 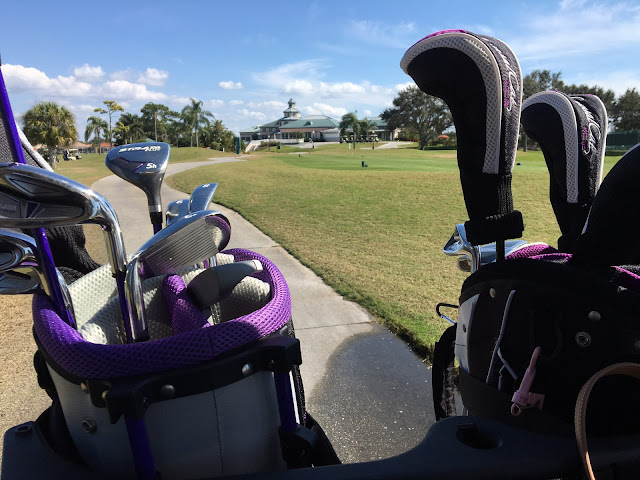 The excuse I give anyone who will listen is that I just learned how to play golf. That’s my story and I’m sticking to it – even though in reality I took lessons at least four years ago. 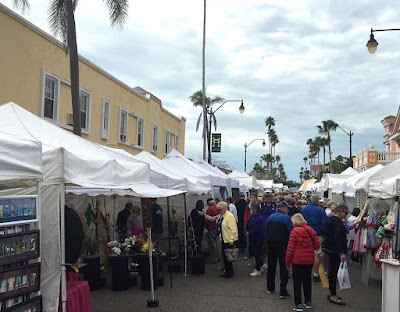 In Venice this weekend an entire street closed, tents went up, and crafters and artists set out their wares. People strolled by with giant bags of kettle corn and others struggled through the crowds with metal sculptures or topiaries made of shells.