Yesterday was pretty much a writing day.

After a much, much, too long hiatus from anything involving much exercise – due to cold weather, plantar fasciitis, and just plain sloth – I hauled myself to the YMCA.

Birds of a Feather


Two houses ago, our cool neighbors across the street would once in a while appear wearing the same shirt. Matching shirts, that is. Intentionally.
I’m pretty sure it was all her idea. She was of the suburban respectable Presbyterian variety.  He was improbably handsome, with a bad-boy vibe, not the type to embrace identical flannel shirts for an afternoon of apple-picking. They did divorce after a few years. Maybe the shirts were the tipping point.
I’m continually trying to avoid showing up like a twin whose mother still buys everything in twos. Yet more times than I can tell you, I’ll emerge in the day’s ensemble after lengthy analysis, choice and rejection, choice and rejection, only to find My Guy is also wearing a blue sweater and tan pants, or the same shade of orange.
Yesterday it was a little grungy out, so we were on our way to a local quilt show followed by an early dinner to beat the high-season Florida crowds. (By the way, I think that’s the real reason people here eat at 4:30, not because they have to rush home for Wheel of Fortune and bed)
I’d recently scored a new long-sleeved top at Pennys and had been looking forward to wearing it until I found him in his painting room . . . . 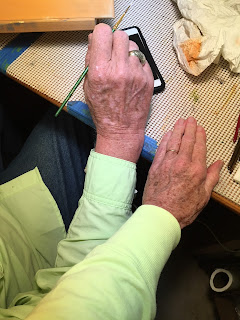 That's me on the right.
(Even our freckled, spotty hands match.) 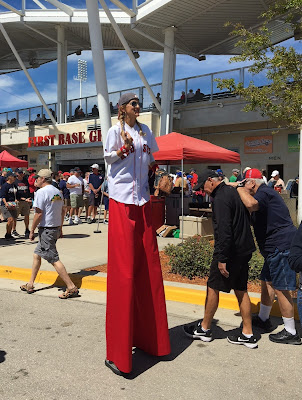 We’re Red Sox people. Probably inevitable, being from Massachusetts, although most of the city kids that I taught were die-hard Yankees fans (those that followed baseball – city kids were more about basketball), likely because many had ties to New York City.
I’m still amazed that I pay any attention to baseball at all. But once you’ve learned the players and the rudiments of the game, it really is more interesting than watching paint dry.
This week we were at Jet Blue Park, the Sox summer training location. On the field was a mixture of rookies and veterans, which I expected, but I was a little surprised by what I saw in the stands. 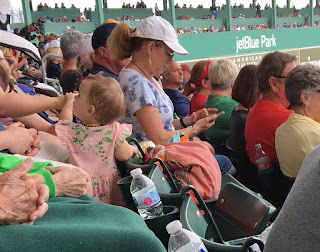 Babies were everywhere. You always see kids at games, with the hat that Dad just bought them, or the mitt ready for any foul balls that might come their way. But I mean babies. 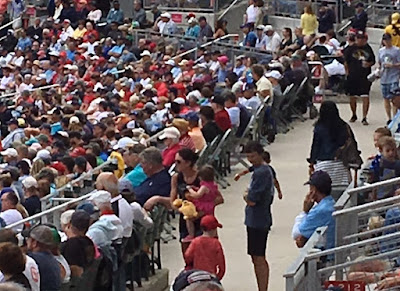 Diaper bags, strollers, Baby Bjorn carriers.
One dad climbed past us into the stands with a bottle in his hand, except it was full of milk, not beer, for the infant he was feeding in his arms.
I couldn’t speak to whether the tiny girl in pink thought Mookie Betts’ steal to second should have been called safe, or if the three-month old two rows back agreed that Tampa Bay needed to switch pitchers when we brought in our lefty Jackie Bradley, but everyone was mellow. Aside from the occasional wail from a bored child, it was a pretty sedate crowd, although that could have been because here in Florida most gatherings have a median age of 53. 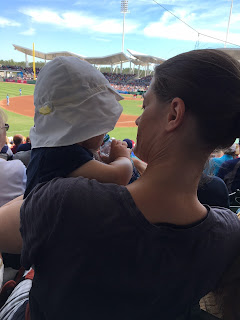 Definitely a change of pace from Boston, with Fenway Park’s crowd of college kids and manic city fans. I didn’t get sloshed by beer once and no one had a B painted on his bare chest.


I figured that Mamie must be bored silly by the same old walk around our complex,

No Room on the Range


My morning was coasting along nicely yesterday.