The Devil's in the Details

Email ThisBlogThis!Share to TwitterShare to FacebookShare to Pinterest
Labels: patience 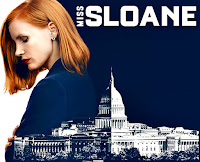 We’re among the few people who actually go to the movies. I don’t care what anyone says – seeing a movie in a theatre, when people can’t call from the kitchen to ask where the potato chips are, is just different. 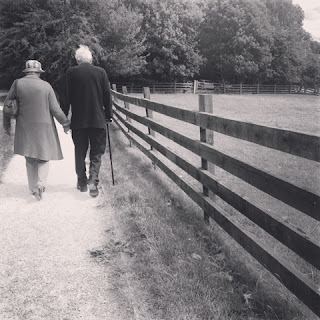 “My grandmother started walking five miles a day when she was sixty. She's ninety-seven now, and we don't know where the heck she is.”
― Ellen DeGeneres

I was on a side street in our little downtown Venice (Florida, that is) waiting for My Guy to pick me up after I’d done my volunteering stint. I had found a seat on a convenient wall in the shade, an excellent spot for people watching.
It could be due to this week’s sudden attack of plantar fasciitis in my left heel, but I began to detect a theme.
Across the street a couple who may have been in their 70s were working their way down the sidewalk. He had what looked to be a hip issue of some kind and was moving slowly. His athletic appearing wife followed about two steps behind, with what looked to be an unhurried stroll, but which was actually perfectly adjusted to his awkward pace.
A car pulled up and parallel parked in front of me. An overweight (and, again, older – I’m in Florida, after all) couple struggled out of either side of the car. He left her behind, crossing the street with a rolling shuffle ahead of her, but then I thought it interesting that he stopping at the curb to help her up after she finally toiled across to him. He then took off again, with her ten feet or so behind, both of them walking with difficulty. It had kind of an every man for himself sort of vibe.
Then to my left, a decidedly elderly couple – late 80s? – appeared on the sidewalk. They were trim in their tasteful khaki; I could picture them later in the afternoon on a green lawn drinking gin and tonics. They walked with the gait of people who likely kept themselves fit with daily morning and evening constitutionals. But as they passed arm in arm, you could still see a slight hesitancy, a bit of caution, when they reached the curb.

Email ThisBlogThis!Share to TwitterShare to FacebookShare to Pinterest
Labels: aging 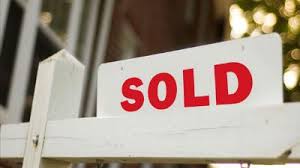 So it’s done. The check’s in the bank, the lawyers and real estate agents have gone their separate ways, and our home is being invaded by strangers. 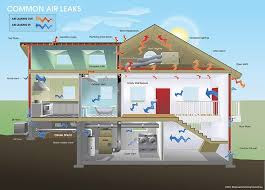 Today I was reading a posting on Facebook by one of our selectmen in our small town at home. There’s been discussion lately in town about requiring all future building to be “green.” Some people are pro  - environment-friendly, ecologically friendly – while others point to increased cost.

Email ThisBlogThis!Share to TwitterShare to FacebookShare to Pinterest
Labels: home

My Dog the Introvert 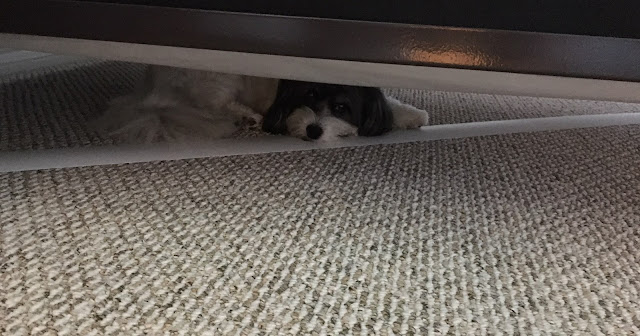 I could use a good animal behaviorist.

Email ThisBlogThis!Share to TwitterShare to FacebookShare to Pinterest
Labels: Mamie

The Romance of the Everyday 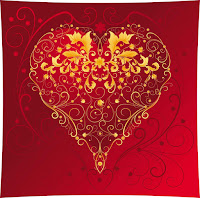 Today is Valentine’s Day and My Guy and I are spending it together.

Rules are for the Birds 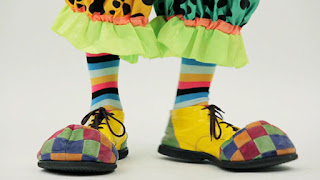 One thing I can say about aging. I’ve definitely become more stable. At least in the category of high winds.


Here in The Land Where Time is Forgotten (along with car keys, passwords, and eating after 5:30 p.m. – aka Florida) I’ve tried to do at least a little something constructive with my time.