I really like the blues and every year we make sure to get tickets for the performance at the Art Center in here Venice. It’s a smallish building where My Guy takes classes and where they have exhibition space that the center opens up for occasional musical performances, nothing huge – I doubt if the room seats more that one hundred.

The blues session is always excellent; the same pianist and singer along with a rotating group of supporting musicians. The pianist, Bill Buchman, is also one of the art instructors at the center, but his piano playing is unparalleled. My Guy and I stopped by a few days ago to look at the latest display and we heard music, stunningly beautiful music coming from somewhere. He said, “Someone must be at the piano in the exhibition room,” but I pooh poohed that with “No, that’s too perfect. It’s a CD.” We turned the corner and there was Buchman in an empty room, just noodling away, probably on break from a class.

This year, after Thursday's performance, I decided to look up the bios of some of the main players. 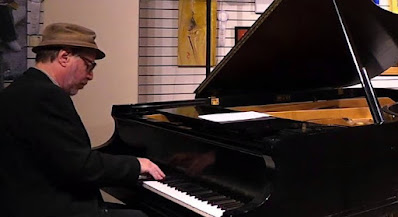 Bill Buchman, as I said, is an artist who’s attended the Albany Institute of Art and Cornell, then later in 1971 entered the New England Conservatory of Music. 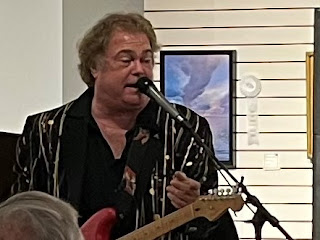 Steve Arvey, singer and blues guitarist, came to Florida in 1978, playing bass with Bo Diddley, returning in the summer to his hometown of Chicago to work as a sideman with blues musicians Jr. Wells, Jimmy Rogers and Sammy Fender. 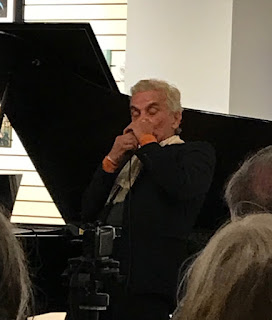 And this year’s addition, Gerardo Rivas, the guy on bongos, congas, and harmonica was even more of a big deal. He was there as support for Arvey, the guy in front, but much of the time you couldn’t take your eyes off him as he moved from instrument to instrument, reacting to the music with gestures, arm waving, and facial expressions. Like Buchman and Avery, he has to be in his ‘70s, especially when you learn his history. He’s played with Duran Duran, Elton John, David Bowie, was a member of Spyro Gyra, and most notable, was on stage with Jimi Hendrix at Woodstock. 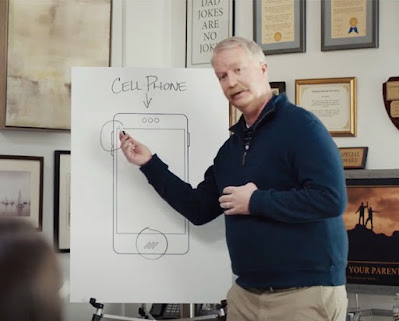 Have you ever seen those insurance commercials on how not to become your parents?
Read more »
Posted by Marty at 7:37 AM 12 comments: 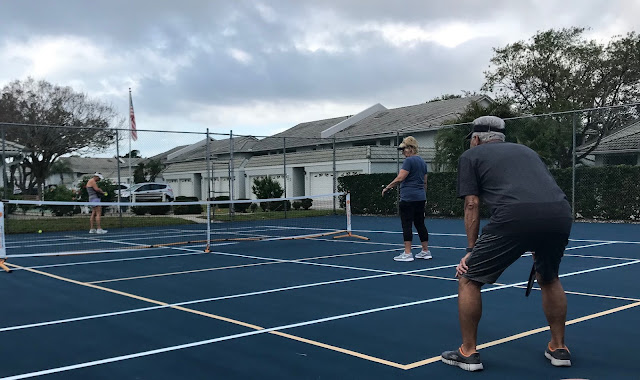 We had our big social event of the week last night, a wine tasting.

When we first began coming to Florida, a friend had been kind enough to invite me to play in her complex’s golf league.

The weather gods, busy wreaking havoc in California, have apparently found a moment to glance our way over here in Florida.

Two weeks later, we feel settled in here in Florida. Our trek from the North went well to the most part, at least with no dramatic weather events. 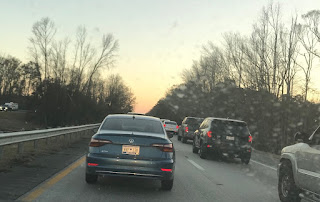 We left as planned, on Jan 1, when we figured everyone would still be hungover and in bed long enough for us to get through the busy northern chain of New York and New Jersey, with our luck possibly holding through Baltimore and D.C. We forgot, however, that the next day everyone would be out and about at the end of this three-day weekend, either enjoying a day off from work or coming home from it.


Thus, route 95 through South Carolina set us back hours – hours! Bumper to bumper for miles and miles, basically ¾’s of the state. The instant we crossed the border into Georgia it all melted away. The reason? In S.C., route 95 is only two lanes and in Georgia it’s three, sometimes four. I think there’s a lesson here for state road planners.

Knowing we’d never make to our hotel until 9:00, we pulled off and had some dinner and suddenly everything felt much better. 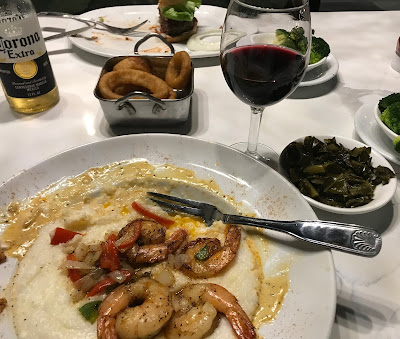 Nothing like a big plate of shrimp and grits with collard greens to tell you you’ve hit the South.