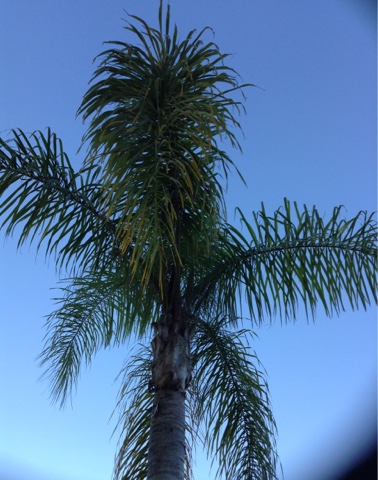 It seems counterintuitive in a state filled with Buick-sized insects and weapons-grade mold, but so far, life here in the Sunshine State is practically antiseptic.
Unlike our 50 year-old house back home, with the on-going war with mice in the basement, here we're sealed off from encroaching reality. Anonymous men appear outside on a regular basis and spray our building to beat back nature, and the central air silently dehumidifies away any lurking mildew.
Our evening walks are on freshly swept sidewalks under groomed palm trees, and the only wildlife we see is the resident bunny, who so far has managed to dodge the rumored alligator in our pond.
If our building were a person, it would just be starting  solids and learning to stand. It hasn't even been around long enough to accumulate dust over the door jambs. In contrast, our Bay State house has bathroom linoleum beginning to curl at the edges and windowsills still scarred from the previous owner's dog, Sparky.
Here, emptying the garbage only requires a brief walk holding our one little white bag from  the front door to the artfully concealed communal dumpster near our garage. At home, we gather a week's worth in big black bags so we can transport it in our car to the town waste disposal area, aka the dump.
We're also unburdened by the flotsam and jetsam we accumulated over 47 years of marriage. Here we have just what we need for day-to-day living. Four plates, two sets of sheets, one laundry basket. It's remarkable how restful clear surfaces can be to the eye, not a tchotchke in sight, no need to move this to get to that.
I think I'll go make tea now in our one mug and try not to think of the piles of leaves on the lawn at home awaiting our return at the end of this week.
Posted by Marty at 5:42 AM 12 comments:

Life in the Commune 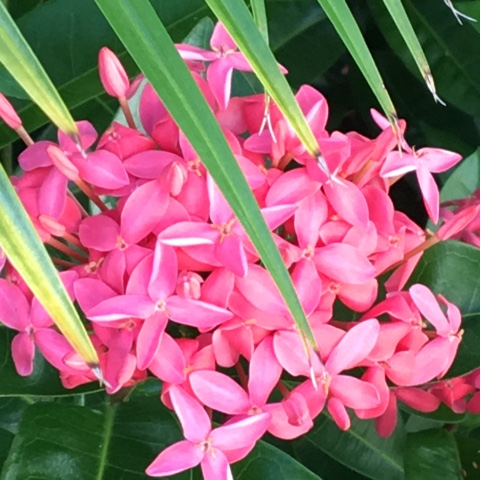 Tuesday was my introduction to shared financial planning. We all met in the clubhouse by the pool at ten in the morning - apparently on the assumption that no one who lives here has a job to get to - accurate based on the expanse of white and gray hair of the15 or 20 people gathered ( except for a few like yours truly whose vanity prevents them from surrendering to nature).
The condo board was only half there physically. They weren't missing body parts - the other half of the board phoned in, not having yet made the migration south to Florida.
The gist of the meeting was that while we still have one more new building going up, some here in the complex are ten tears old and haven't been maintained due to lack of funds. Additionally, the company hired to keep up the outside of these three story units is woefully underpaid.
Unless we seniors want to get out there with our own pressure washers and telescoping brushes, we're going to have to bite the bullet and vote in higher association fees.
Along the way to that discussion we had forks in the road like the comment from the man in the oddly military patterned shirt and matching cap. "What about licensing? Better make sure these contractors are licensed.  They get hurt and we're all in trouble!"
The moderator got him simmered down and we returned to issues like building paint colors, spraying for weeds during a summer that rained every single day and so washed off all attempts, and interlopers who sneak into the pool area and unscrew the light bulbs for a midnight swim.
Fortunately, we have two gentlemen with financial resumes who have begun guiding our complex down a sounder fiscal path. Most of the people in attendance sat passively, contributing little and one of the phone-in board members was all in favor of increases in labor and landscaping, but voted against any increase in fees. Maybe he was planning on organizing a bake sale to fund the needed work.
Posted by Marty at 9:23 AM 9 comments:

Yesterday evening we invited the next door neighbors over for drinks to thank them for watching our place while we were away. Four hours later My Guy and I finally scarfed down some scrambled eggs at 9:30. I'll need to tone up my imbibing skills if I'm going to survive when we return in the winter.
A walk this morning seemed like a cleansing way to begin the day.
Not quite the same as my morning stroll in our small New England town.
There were plenty of locals: 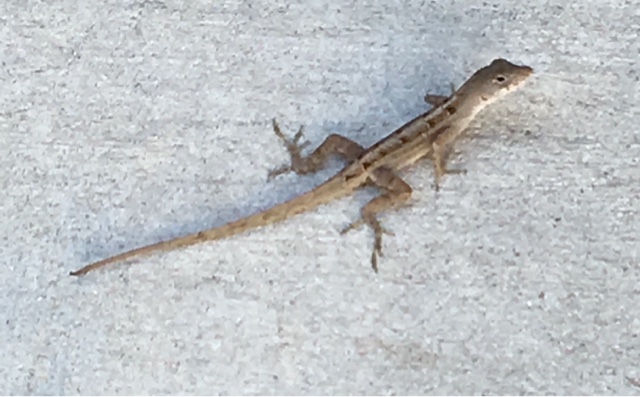 And the sidewalk next to the undeveloped land in back of the complex can make me walk I little faster - sightings of bobcats and alligators and rumors of wild pigs aren't uncommon. 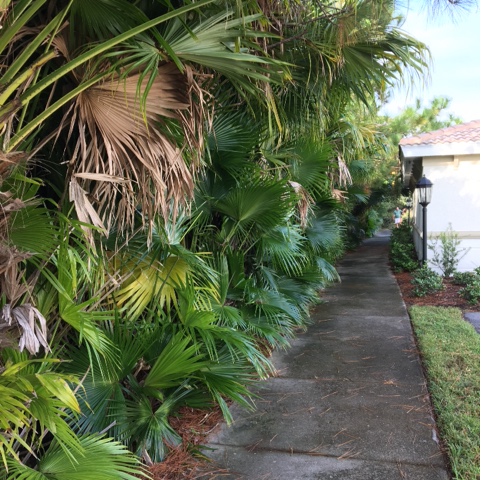 Instead of gold and red maple leaves, the sidewalks have discarded palm parts like this pre-historic looking husk. 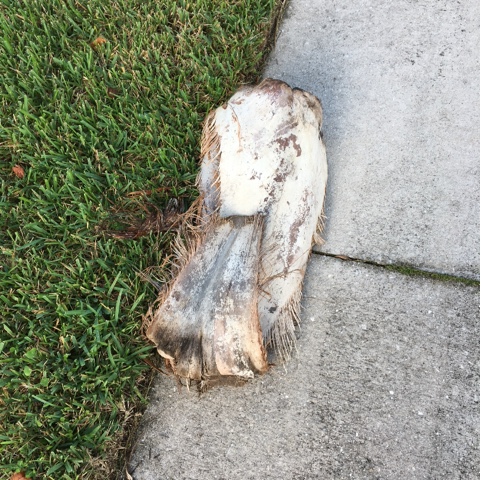 And instead of strands of ivy, trees become home for opportunistic ferns and vines. 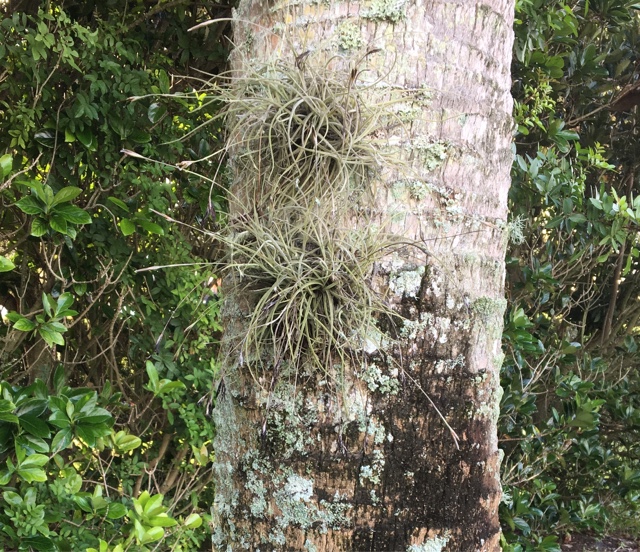 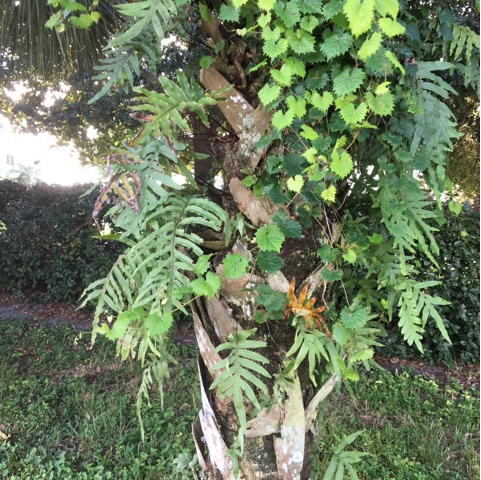 But the sign at the pool house woke me up faster than my morning cup of tea. 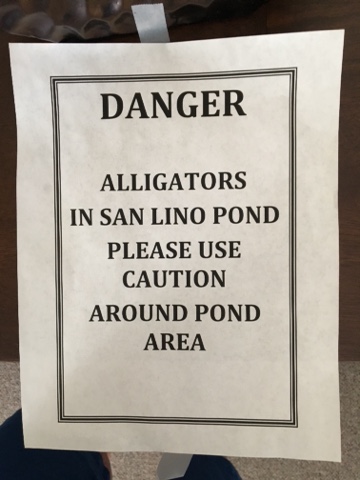 We've left the land of apple cider and sunset colored leaves for two weeks.
I didn't even need to see the palm tree outside our window to know I was in Florida.
Two ads from the local paper were indications enough: 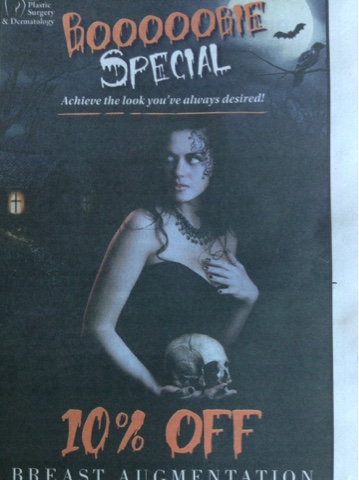 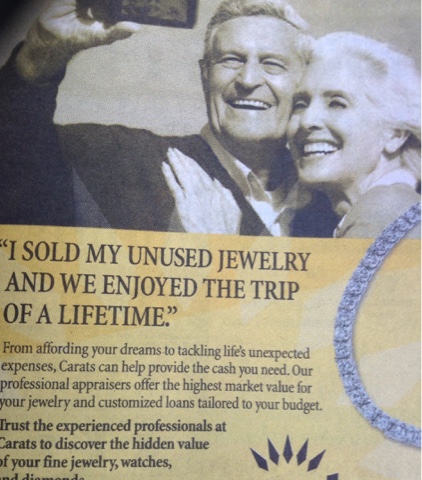 Life feels as though it’s zipping along, although I’ve had large swaths of downtime so I fear my absence here is due more to lethargy than pressing obligations.
The past week included a visit to the hills of New Jersey to visit grandchildren (and their parents) where we stood on a succession of wet soccer fields in unrelenting mist. Still, it was pleasant – isn’t that what the Irish call “soft” weather ? -  and brought back memories of other fields with my own children galloping up and down.
We also managed a grown-up dinner at a newly opened local restaurant that, sadly, was so excellent its success will likely move it on to a larger venue.

This week I met for dinner with a newly-formed gathering of mystery writers of Western Massachusetts where I found myself becoming uncharacteristically quiet, surrounded as I was by writers much more accomplished than myself. “Unpublished” felt as though it was tattooed across my forehead.
Among those in attendance –

Lisa – cultural and intellectual historian, author of at least six books, subject of
several interviews on National Public Radio, and absurdly pleasant and
self-effacing.
Lee – former television writer and producer (Edgar Award for best television
teleplay, author of several fiction and non-fiction books.
Glenn –author of 15 mysteries, professor of philosophy
Ray – our organizer and representative from the Boston branch of Mystery
Writers of America, author of God-knows how many Boston-based
mysteries, winner of this award and that award. Also absurdly pleasant and self-effacing.

I just tried not to use double negatives and pick my teeth. My degrees, years of teaching English, and 2 ½ (mediocre) books were mere foothills to their Mt. Everests. Still, it was helpful to be surrounded by writers and be reminded that this was something I enjoyed and should stop neglecting. And my pasta was excellent.