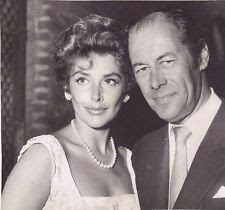 I found an old 1957 movie on TV the other day, Les Girls, staring Gene Kelley.
He may have been the titular star, but the person who absolutely radiated from the screen was an English actress I didn’t know, Kay Kendall. Besides being stunningly beautiful, Kendall’s comedic skills stole the show and earned her a Golden Globe. I was surprised I didn’t remember her from other movies, but she had starred in predominately British films and died of leukemia only two years later.


When the movie was over, the Turner Classic Movie host, Ben Mankiewicz, revealed that when Kendall was diagnosed with cancer, her doctor told her husband Rex Harrison, but let Kendall believe she had an iron deficiency. The two had only recently married and Harrison cared for her till her death.


I knew this wasn’t that unusual at the time, but still had to look it up. In fact, a 2006 study by the Journal of the Royal Society of Medicine stated that in earlier times doctors usually felt it was in their patients’ best interest to conceal a diagnosis that was most likely fatal, quoting the attitude as that of “hope over truth.”


In 1953, a questionnaire sent to 444 doctors in the Philadelphia revealed that 69% of respondents never or usually did not inform patients of a diagnosis of cancer.


In those days, cancer really was often a death sentence.


By the late 1970s, things had turned in the other direction, with a survey to American doctors showing that 97% said they would disclose a diagnosis of cancer.


It must have been a bit like losing your mind, knowing full well something was terribly wrong, but everyone assuring you that you’d be up and around in no time.
Posted by Marty at 1:06 PM