Those people who produce a blog post each day are pretty impressive.
It’s probably more achievable if you’re someone like John Gray in Wales ( Going Gently ) who has a herd of cartoon animals and a village full of quirky neighbors. Animals are a particular help; they can usually be depended on to do something cute/annoying/destructive at least every 24 hours.


Now that we’re pet-less, something we both think about each day but aren’t ready to correct yet, that’s no good as a source of material.


And I can’t turn to my neighbors for madcap hilarity. They’re pretty sedate, going off to work each day in a boringly responsible way, and when they’re home, doing nothing more colorful than visiting each other on riding mowers.

Now if we had my husband’s childhood neighbors, we could count on Mr. Trombley to run out in his driveway every now and then with his miniature cannon, which he’d fire off and then gallop back with to the garage. The motivation for this was never very clear.


We did have the family of delinquent kids next door when we lived in Springfield. They weren’t so much colorful as annoying, pulling shingles off their own garage roof and flinging them at our car, or coming home loudly late at night. Fortunately, things settled down a bit when they discovered serious drugs.


When we moved here twenty years ago, the people who lived next door then had promise. They did religious outreach at the county jail and it was said that occasionally some of the prisoners were given a day release to come out here and rake leaves. That must have been before our time; I never did look out and see a parade of orange jumpsuits.

So if I were to attempt a daily post, today’s would start with my trip to the YMCA treadmill this morning.  Everything was fine until five minutes into my stationary journey I realized I must have put my exercise tights on backwards, judging by the whistle of cold air right above my backside. I kept on going; it’s hard enough to get motivated to exercise without stopping to run to the locker.

Two miles and a couple of toning machines later (which have had no effect whatsoever), I slapped on some lipstick to cancel out my no make-up, scary hair, going-to-the-gym look and drove over to the high school to vote in the Massachusetts primary. If ever there was a year to employ your one vote, this is it. 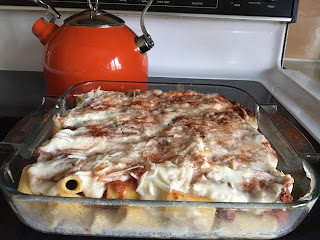 At home I sat down with home-made granola and tea and scrolled through some of the other writers I follow. I soon discovered Cro Magnon’s (Magnon's Meanderings) video on Greek Pastitsio, something I used to make years ago. Thank you, Cro. What to have for dinner was solved. Good thing I had an hour and a half to dork around with boiling pasta, making the meat sauce, and then the béchamel sauce.


Then sweeping the kitchen floor led to washing the kitchen floor, which led to getting on my knees and scrubbing grandchildren’s scuff marks and crayon souvenirs from a kitchen wall.  This is how most of my cleaning happens. I call it guerilla cleaning because it sneaks up on me; ten minutes before that I had no idea I would be up to my elbows in ammonia.

After all that exercising, voting, and cleaning virtue, I decided I deserved to fritter time away on the computer. The result was an order of business cards for a book talk in April.


Not the most riveting report. Maybe I should see about getting a bull dog, or perhaps a goat.
Posted by Marty at 1:51 PM