One good reason to open your home to company is that it will spur you to get up out of that armchair and actually go out and see the sights where you live.

One event in our campaign to keep our visitors busy was a boat trip down the Myakka River. The trip is a tame affair, a flat-bottomed boat holding 20 people and meandering about a half mile one way up the river, then a half mile the other. I immediately crossed it off as entertainment for the three grandsons who will be here soon. 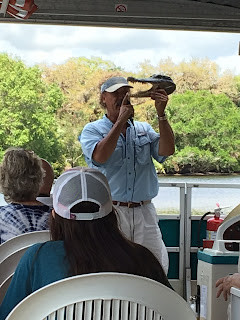 Still, the man at the microphone was chock-full of information and factoids and we did get to see our share of crocodiles slithering into the water, one in the direction of the couple behind us in a canoe. 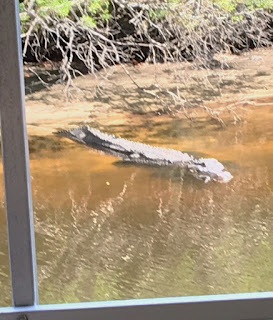 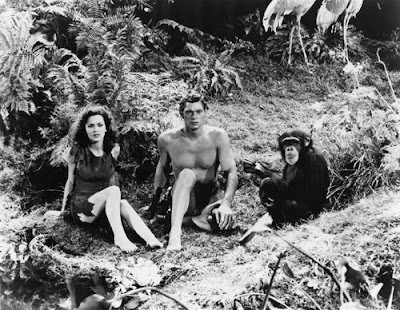 I learned that one or two of the Johnny Weissmuller films were shot here on this same river. (Who, by the way, as a swimmer won 5 Olympic gold medals, one bronze, 52 US national championships, and set 67 world records.)
For someone who sat in front of the black and white television on dull Sundays watching old 1930s movies this was heady stuff.

My favorite factoid from the day, though, was learning about Spanish moss, which you’ll see draped on anything around here that’s stationary for more that 7 minutes. It’s gotten a bad rap – it’s not a parasite, but lives independent of the trees it attaches itself to, living off of rain, fog, sunlight, and airborne dust and debris. 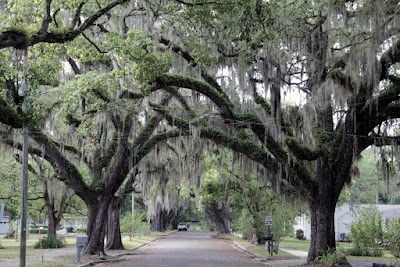 Natives had used it to stuff pillows and mattresses and settlers learned it made a great binder for brick making. It also triggered one of the earliest automobile recalls.


Henry Ford discovered its durable properties and began stuffing his Model T upholstery with it. Unfortunately, he learned too late that the moss closest to the ground often contained little red bugs, called chiggers, and these weren’t content to stay quietly in the car seats but instead began crawling out and biting drivers.
Posted by Marty at 7:11 AM