A slice of the olde world 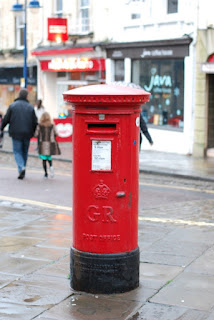 Here in the US, today is a day for some to celebrate their heritage, or just borrow it long enough to lift a few green beers. My errand today, though, took me in another direction.

Our guests from the weekend left behind an item small enough to pop in an envelope and mail back to them. Problem was, I needed the small envelope.


We were happy when, rather than schlep all the way to the official Post Office in town, we discovered we could instead go to a nearby strip mall, which housed a card shop with a Post Office counter in one corner.


So that’s just what I did. I found the mailing envelope I needed, but waited to address it since there was a sign warning that they first must be purchased. There were two registers; the one to the left had a cluster of women in front of and behind the counter, chatting away. I chose the other register as more likely to speed me on my way and stepped behind the man in line.


I soon became aware that the clerk behind this register was gesturing at me, and directing instructions my way. Unfortunately, it wasn’t until the third try that I understood that the other register was for purchases, and his was the official one for the U.S. mail.


After I paid for my envelope and stood to the side addressing it, more unfamiliar accents swirled about me. I might as well have been standing in Cheapside, East London.


It must have been a family enterprise; the mother and daughter had English accents, while the one of the gentleman behind the counter was an impenetrable Cockney.


Stay alert. Even our Post Offices are falling into the hands of those “from away”!
Posted by Marty at 1:17 PM