On special holidays and birthdays our phone in Virginia would ring.

It would be my grandfather calling from Oklahoma
. Only my grandfather, because due to a childhood bout of scarlet fever, my grandmother was completely deaf. He would speak in his slow, deliberate southwestern cadence first with my mother - "Hi there, Martha. It's mighty fine to hear your voice," and afterwards to my sister and then me. The call was always a momentous event - Long Distance - costly and far away. My grandfather, a geologist, was a well-educated man but still retained some of his Tennessee farm up-bringing. He always spoke VERY LOUDLY when calling, as though it were not wires that were transporting his voice, but instead perhaps a long tube.

We visited this set of grandparents most summers so we knew their house well. A phone call could easily awaken memories of bare feet on a hot flagstone driveway, rooting around in an upstairs cupboard for my uncle's old Pogo books, or most magical of all, sleeping on the upstairs screened porch during a rainstorm, the end of the roll-away bed covered in plastic to keep it dry.

My grandfather always called from his study,

which held the only phone for the downstairs. Even though
long-retired, he would sit in his study and review reports on
land for which he had bought mineral rights or read about
the latest findings on a well he might have invested in.

If hearing his voice didn't trigger memories of hot Oklahoma summers, the clock that sat over the small office fireplace there certainly did. It chimed every fifteen minutes, and resonated with bongs on the hour. If I had to name a sound that represented constancy and comfort, it would be that clock.

Now, after many years and several tune-ups, the clock sits on my mantle and I'm the grandparent. My success with it is somewhat checkered. When it was in full working order I realized how very loud it was, chiming across key moments in TV dialogue and pointing out the time every fifteen minutes to my book club. Lately I've figured out how to limit its proclamations to once an hour, although unfortunately the hourly bongs are falling at seventeen minutes past the mark for some reason known only to it.

It will stay on my mantle, however erratic it may be. And when my three grandsons visit or when I speak to them on the phone, our conversations will also be punctuated by these distant chimes. 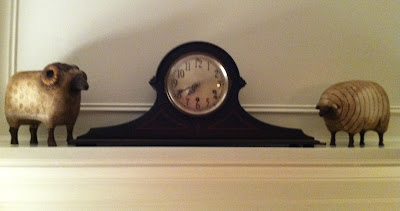