Having a bedroom on the first floor means that when I wake up and open the curtains, I can climb back in bed and look out at the woods as I read for a while.

This morning was no exception, and I was peacefully scrolling through the mail on my iPad when a massive shadow passed the window, followed by a dull clacking sound. I knew that sound. Sure enough, the gang was back, led by a tom bigger than the ottoman in our den. Seeing turkeys fly is an experience, erasing your brain’s expectations of what you’re used to seeing suspended in the air. 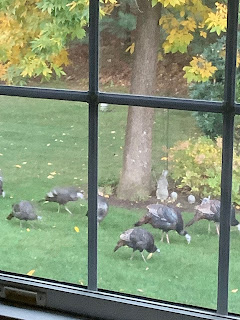 Twelve this time, and they were a lively group, flapping and hopping around while the big guy watched as possessively as a sultan with his harem.

And now for something completely different. . .

I was just reading a newspaper article this morning about a local mother and adult son who became deathly ill after eating mushrooms she'd foraged. It drew my attention since I've been investigating mushrooms for my next book, if I ever get around to finishing it. Seems they looked just like ones she knew in Malaysia; unfortunately, these were the death cap mushroom, so potent that one cap has enough poison to kill 2 adults.

Interestingly, just in case they might be poisonous, she took the precaution of cooking them with ginger. Apparently some cultures believe that ginger will turn black if it’s cooked with something poisonous. When nothing happened, she prepared a meal for herself and her son.

Mother and son, after two days of severe diarrhea and vomiting, were admitted to the hospital. Luckily, there were both saved, but the mom ended up needing and receiving a new liver. I guess it’s time to retire that whole ginger theory. 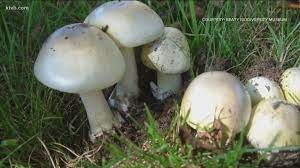