This weekend found us in the land of peanuts and beer. 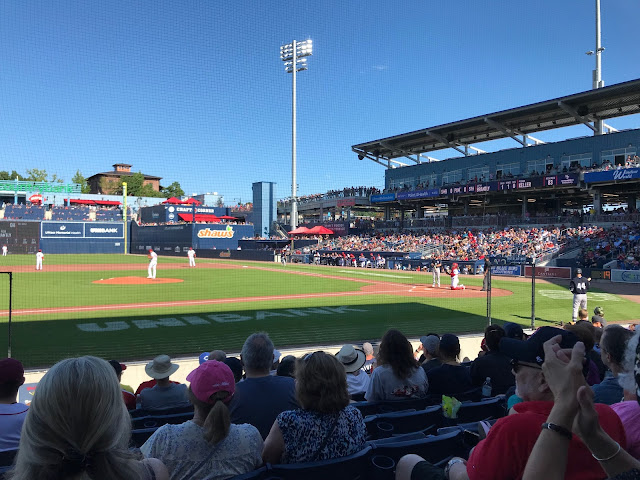 We were in Worcester, where the farm team for the Boston Red Sox play. The team was originally known at the PawSox, since they were based in Pawtucket, Rhode Island. For reasons that are still not clear, they up and moved to Worcester in the brand-new stadium the city had built for them, which might explain the move, and changed their name to the WooSox.

Imagine our confusion when the scoreboard read PawSox. Too cheap to change the graphics? When the announcer also referred to them with their old name, it took the kind guy in front of us to explain what was going on. Seems that day had been declared Rhode Island Day, probably to draw in fans that had been left behind in the move.

I guess we’re destined for confusion, because the last time we’d been there we heard two national anthems, one in English, and another completely different one in Spanish. Turns out we’d wandered into Puerto Rico Day. 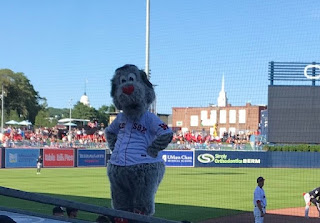 It was a fun day, though. These AAA teams work hard to keep the fans coming back. At every inning change there were events in the outfield involving them – 8 year-old announcers, contests to see who can hit the whiffle ball over the back wall, which child can run the giant coin to the giant piggy bank the fastest. Not to mention the mascot, who spent much of the game on our side of the stadium, probably because we were in shade. 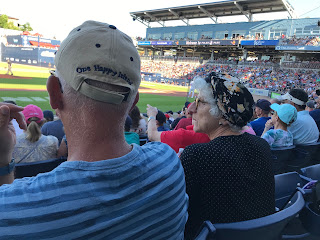 Another side entertainment was the woman in front of us, who was dressed as though she’d just left Boston’s Italian North End. Unlike this one serious shot that I caught, she had a whale of a time, chatting with the young couple a few seats down, singing along with the mascot, and jumping up to do the “wave” as it passed through our section. That woman knew how to have fun.
Posted by Marty at 6:27 AM