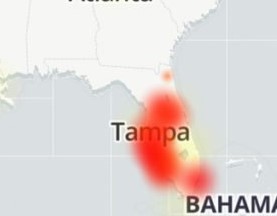 Late Monday afternoon the unthinkable happened. No internet. No cable.

My Guy and I moved out to the porch, the better to grab whatever satellite was overhead. Access was moving slower and slower. Apparently everyone else had the same idea. Our biggest issue ahead was likely boredom, but from other parts of Florida came:

"Now the app is saying it’ll be resolved by 4am in Ft Myers - I HAVE EXAMS THIS WEEK PLEASE!!! I’ve been working on a research paper for days and today was the day I needed to turn it in."

And it seemed there was no justice for anyone:

“I had a hearing this afternoon that was on Zoom with the court at 3 o’clock and it’s common for the court to schedule several issues to be heard at the same time,” said one attorney. Court proceedings via zoom had been cut off. “Is this thing on you know? Like nobody is responding. I’m like oh no, we lost the connection. I didn’t know if I got my whole argument in or if it cut off mid-argument.”

As it turned out, a big chunk of the state was affected, from Naples, along the western half of the peninsula and into north central Florida.

We’ve been driving around the past few months, stunned by the number of ranches and wild areas that are gone, and the incredibly huge developments taking their place, many of them already sold out.  I can imagine someone in the depths of snow country saying, “Hey, Hon. Since we can work from home now, what say we pick up and move to Florida?”

Not only will I never find a seat in a restaurant soon, getting on-line may make us feel like we’ve gone back to those dark dial-up days.