We woke up this morning to snow dusting the ground and decorating the long pine branches in the woods. I pulled the shades up and climbed back in bed in time to watch seventeen turkeys peck and cluck their way across the backyard, their feathers so much darker against the new white snow.

We still see shadows of Mamie on the couch or tucked into her bed, but the sadness is fading. My Guy stopped by the groomer’s to pick up her collar and leash, and learned a bit more. She had been waiting her turn in a kennel, standing right near the owner of the shop. The woman turned, and when she turned back Mamie had collapsed. So at least it was mercifully quick and not a long, drawn-out decline.

At least I’ve had a new project to distract me.

I should write a new version of The Twelve Days of Christmas. It would go something like:

And 6 gallons fewer of gas in the tank, tra la.

Our daughter in N.J. and I in Massachusetts have been on a Rapid Test quest so that we can all gather for Christmas. We’re all vaccinated, and somewhat boosted (the teens haven’t been), but our 3 year-old twins are of course vulnerable.

I managed to snag one test each for My Guy and me, and our son and his wife in Rhode Island have a stockpile (since the girls’ preschool won’t let anyone in with a tissue in their hand, never mind a runny nose), but our daughter had 5 family members and only 4 tests. Finally, after a three-day search, she had a complete set. 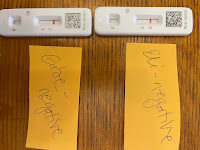 The results are rolling in, and it looks like the six pounds of salmon, the two trays of my homemade baklava, the catered tray of Chicken Francaise (for 12), the six kinds of cheese, the pecan pie, the two half-gallons of ice cream, the batch of Christmas cookies, the cupcakes, and the seemingly 200 pounds of fruit will have someone besides My Guy and me to consume them. 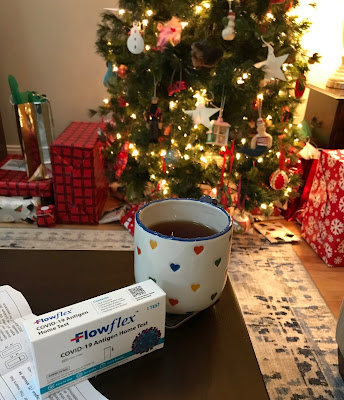