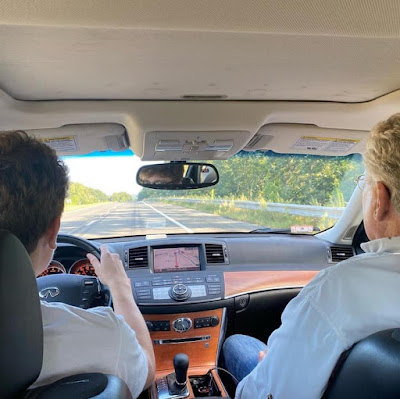 This week we passed on an automotive torch, so to speak, handing off My Guy’s 15- year-old sedan to grandson #2, who’s entering his senior year in high school.

Much of our married motoring life was filled with a succession of used vehicles, beginning with the ’67 Mustang we bought from my father, to which we slapped on a U-Haul trailer and took our few goods and chattels to My Guy’s next assignment in the army. Several cars followed after that until we hit the heady pinnacle of buying a new VW Rabbit. (Never mind the fact that he test drove one without, and then ordered one with a sun roof, discovering on pick-up day that its roof was lower and he’d need to scrunch 6’2” frame a bit to fit.)

We also have a history of hanging onto our cars. Several vehicles later we leased a Nissan SUV, ultimately bought it, and held on to it for 20 years. It barely broke 100,000 miles since most of its life was spent being toodled back and forth to school by an English teacher (me), and then ending its later years as the third vehicle used only to make runs to the town dump. It still ran like a tank, its only Achilles heel the rust that was gradually chewing it up.

Now we’ve entered the land of leasing full bore, both his and my rides, and this may be our MO for the foreseeable future. In your golden years there’s a lot to be said for a dependable ride, and one that you can trade in three years later for another dependable ride.

On Sunday, our daughter and her family wagon-trained our donation back to New Jersey, reporting that it had made it all in one piece, remarkable considering the car hadn’t done much for the past five or so years other than ferrying My Guy to get his paper in the morning.

Meanwhile, I suspect grandson Gabe may have spent Sunday night not in his own bed, but in his driveway.