Love in the Backyard

My plans to make some progress on my fourth book were rudely interrupted today by romance.

As I sat at the computer, my eye caught a movement outside of the window. 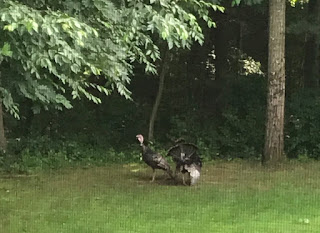 A tom turkey was squatted on the ground, wings extended, and tail rising to full fan. Nearby was a female. He rose and approached her, and I managed to snap a picture or two, but then they faded into the woods and I heard distant gobble-gobbling.

A few minutes went by and I settled back to my writing (ironically, a scene when my character discovers an attractive man she hadn’t noticed before) but then the lovers emerged again. 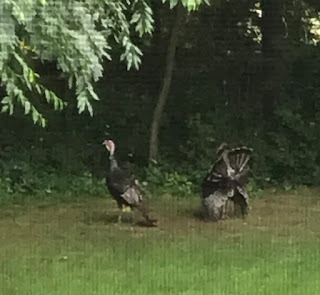 This time the hen looked vaguely interested, and stood still as he traveled around her, one circle, then another closer circle, so she could appreciate him in all his magnificence. Then the plot thickened. A third turkey appeared from the woods, spreading his tailfeathers. A menage a trois? But within seconds it all fell apart.

She turned away, her suitors' tail feathers drooped, and she made a run for it, full-tilt across the backyard, with both males in hot pursuit.

Can you blame her?