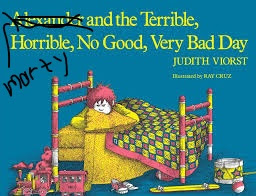 Yesterday started innocuously. I had a fun time on the rag-tag golf course my friend and I go to. So what if we had to skip a hole because there was a man on a giant bucket loader busily digging a pit in the middle of it? So what if I lost three golf balls to the rampant shrubbery and the mucky brook (a new record, by the way)? At least a nice stranger rolled up in his golf cart and gave us each three balls he’d found as he was playing. So there ya go. I came out even.

There was that faint unease in the back of my mind when my golf partner said she’d received her order of my new book (great!), but why was the print so much smaller than in my other two books (HUH???). But I pushed it aside to be thought about later.

Then in the afternoon the box arrived.

The big box. Full of copies of my new book.

I opened it, lifted the packing, and pulled out a paperback.

I thought about the numbers of kind (and now vision-threatened) people who’d confided they’d ordered my book. It made my heart stop and my stomach sink.

The rest of the day was spent wrestling with manuscript, templates, and websites. Probably pointlessly, since the sum total of people likely to order it (all 20ish of them) have come and gone, and will never see the new, improved, and actually readable edition.

(And for anyone who still might want to order one, give it a couple of days for the new version to hit Amazon's book site. )