It was touch and go, but I actually remembered my eye appointment today. Two weeks ago, I was doopty-dooing aimlessly around the house only to realize it was 3 o’clock, and at 2’clock I should have been at the doctor’s, having someone puffing air into my eye sockets. I called and apologized profusely, but the office lady seemed fine with my spaciness and calmly scheduled me for today. I felt terrible. I’m one of those people who is there when I say I’m going to be there.
As I’ve written before, I’m still pretty new to this whole eye doctor thing. Years and years of 20/20 meant that it had never occurred to me to go to an optometrist.
Everywhere the routine is a tad different, whether it’s the vet or the dentist.
Here I answered all their questions from the car, was admitted past the locked door and had the temp check, then was sent to a corner to wash my hands (feeling a little like a 5 year-old who’d come in from making mud pies) , and finally made it into the rooms of machines.
This office changed hands about three years ago and I like this new guy, who has kind of cool-guy vibes and has been spotted here in town on a Harley. He’s young enough that he’ll be around for quite a while, and according to My Guy, who has all kinds of eye things going on, the doc knows his stuff.
My eyes haven’t done anything interesting since I was there last, so that’s good. But even though I was all dilated up, my eyes were drawn down to my physician’s feet. 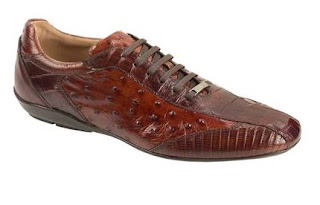 Not only did he have on penguin socks, but his footwear was epic. This picture is only an example, but when have you last seen alligator shoes on anyone?
(And the eye game must pay off, since these from on-line were $750.)