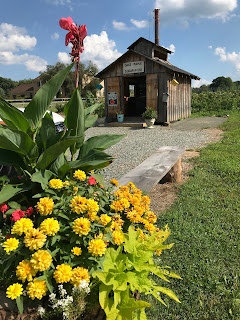 I realized yesterday how dull my life had become when my heart skipped a beat after I pulled open the drawer filled with a jumble of measuring spoons, a garlic press, cheese knives, measuring cups, meat mallet, and I don’t know what-all.
I didn’t know because it was such a jumble. My heart swelled at the thought that here was something I could organize -a sure sign that I’d been house-bound for too long.


This morning I did get out to play golf – badly as usual. That’s one thing upon which this pandemic has had no effect. But I was out. It was sweltering, but I had sunshine and conversation.


Adding to the giddy excitement of the day, Mamie and I took a ride in the afternoon to a farm stand we discovered recently. Shortly after we moved into town, I’d written about the magic of a self-serve vegetable stand, at that time Merrick’s Farm, established in 1741, where you drove up, chose what you wanted, and popped your money in the big lidded pot. Sadly, Llewellyn Merrick died at 90 last December. He was a graduate of Amherst College and an engineer. His corn was spectacular. 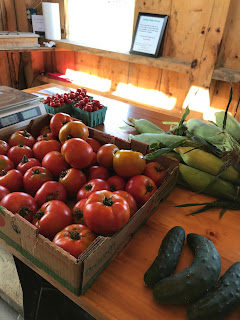 Our new spot is up on the mountain, surrounded by corn and fields of flowers. I was thrilled to find real tomatoes, the tops green and cracked, promising the kind of taste that has you eating it over the sink as it drips on your hand. 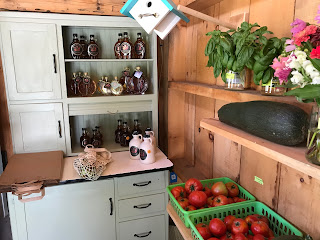 I now have corn for tonight, fresh cucumbers, and plans to return on a regular basis. They also offer maple syrup tapped from nearby trees and I’ll bet there will be winter squash in the fall. 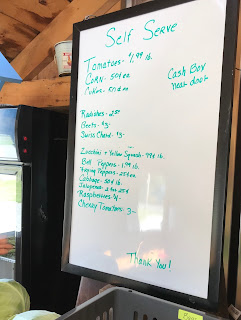 With no one overseeing me, I weighed my tomatoes on the scale provided, popped my corn and cukes in my string bag, and put my money in the wooden cash box which had a pile of bills held down with a rock and coins scattered for making change.