At our dentist, there’s a dental hygienist we’ve always called Chatty Cathy because she never. shuts. up.
At the first opportunity, I defected down the hall to Jen. I love Jen. She’s friendly, we have short little conversations, but mostly we go into our own zones and listen to the radio as she scrapes and flosses. I also love her because she numbs my mouth with a topical agent before beginning. Given the choice, I would unhesitatingly choose major surgery over having my teeth cleaned.


My May cleaning appointment was bumped by the virus to July, and I also lost Jen and instead was assigned one of the dentists, pressed into the breach because of the crush of rescheduled appointments. 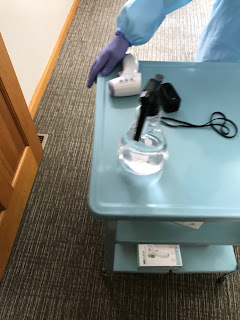 I arrived, as instructed called in to the office from my car (what did we do before cell phones?), and entered wearing my mask. I literally couldn’t cross the threshold until I answered a medical questionnaire, had my temp taken, and had my oxygen level taken.


I’ll spare you the play-by-play, although I can report that this dentist used the numbing agent with such abandon that my lips were still numb that evening, not a bad thing if you’re as jumpy as I am in the chair. It was stunningly boring. No radio, no conversation whatsoever. Just silence and the scrape, scrape of his instruments.


And by the way, would you recognize your dentist on the street? I have no idea what the man looks like. He pads in from the door at my back, I get a brief glimpse of gown, mask, and two eyes, and I’m tilted back for 30 minutes or so, and then he wishes me well and pads out. For all I know, my teeth were cleaned by the tax man from the shop next door.


This morning, a day later, I received an interesting phone call. It was the dental office checking up to see how I was doing. This hadn’t been an appendectomy, for pete’s sake. They didn’t exactly say why they were calling, but I read between the lines and assured them I was asymptomatic.