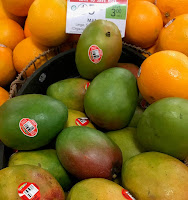 Yesterday was grocery day. There are a few other choices here, but out of sheer laziness I generally end up at the nearby Publix, one of a massive chain in the area.
I have gotten a little spoiled by the intensive customer service, unlike some other places where I feel like I should thank the surly bagger for deigning to put my cereal in a sack.


At Publix you almost have to beat off the bagger (who’s often older than me) to prevent him from helping you to your car. Yesterday the helpfulness was intensified; people were being walked personally to the item they needed. Looking around, I realized the reason. The place was awash in upper management types conferring in the bakery or staring into the deli cases.


I began as usual in the produce section and headed for the mangoes, of which I’ve become a big fan. They were on sale last week at a fraction of the price I pay back home so I was hopeful.  There they were, but the sign said 2 for $4.


I moved past, thinking, “Well, maybe next week.” But there before me was another grouping of them, this time labeled 4 for $5. This was more like it.


I checked to see how these mangoes might be different from those mangoes one foot away. Identical.


I walked over and interrupted three men in ties with my query.


One followed me back, looked at both groupings, checked his phone, and then assured me that yes, they were still on sale and the second price was the correct one.


I loaded up a bag with an armload of my favorite fruit.


I put it in my cart and looked up to see him strolling back to his colleagues. 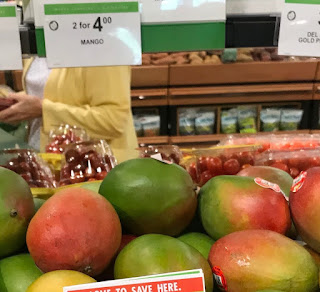 The conflicting prices remained on display.
Posted by Marty at 8:22 AM