Culture on the Coast 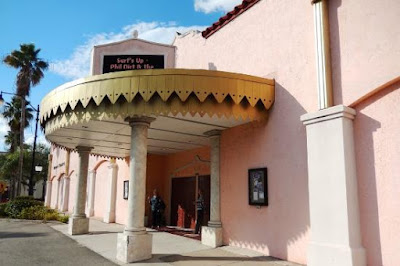 Our little town of Venice happens to boast the second largest community theatre in the U.S., so what better place to try a theatre appreciations class?
Before later becoming an honest woman with degrees in English, I had begun as a theatre major, although I did gallop off to get married before graduating – a long, long time ago.


Oddments of props leaned against the walls, and down the hall people painted backgrounds for the next performance. Eight of us eager students sat gathered around a small table in one of the collection of rooms over the performance spaces. We’d drifted in like the beginning of our own play. My friend and I had followed a gentleman in as the first three, she and I retired teachers looking to try something new, but although he sat next to me, I never learned more than that he was from New Jersey. Another man followed him and sat at the end, and we were turned toward him chatting when the next two came in. This pair was a woman and her husband, who had walking difficulties and had stumbled and almost fallen as they entered. Next came an early 60ish athletic bald man with small double earrings, and last, a dapper man possibly in his late 70s. Actually, we all were firmly of retirement age.


Our instructor, a genial kind of guy, is a semi-retired professor of theatre who began his career as a stuntman in Hollywood. We did sit through a good 20-25 minutes on his background, with a healthy amount of theatre name-dropping, all lost unfortunately, on my small-town ears. We finally, got down to it, and spent much of the time analyzing a passage and discussing how to present it.


Personalities are slowly emerging. When Macbeth came up (“the Scottish play”), I fought back the urge to trot out my own material from years of teaching it. No such luck with Mr. Dapper, who turned out to be a retired lawyer determined to parade his erudition on law, Beowulf, and any number of other things.


We even have homework – reading Equus – about which I know absolutely nothing except someone wears a horsehead on stage and not only Daniel Radcliffe, but Richard Burton played the title role.
Posted by Marty at 7:24 AM