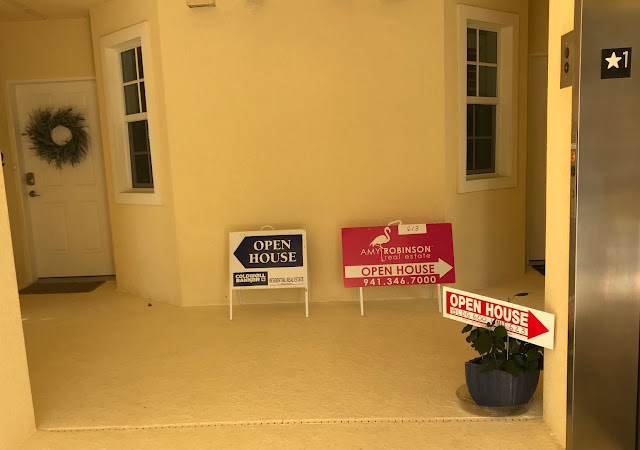 I’m learning to lock our front door.
Not because of rampaging senior cat burglars out to finance the seasonal uptick in golf greens fees. It’s all about the real estate turnover here; there are so many units for sale you’d think they’d discovered a cracking foundation or zombie-transforming water in our 3 year-old building.


The cause is much more mundane. All three of the units for sale in our building are owned by transplanted Northerners who, after downsizing, realized that a two-bedroom condo wasn’t going to cut it. In every case, they’re moving to a house.


So every weekend it’s the battle of the real estate bands and we’re sandwiched in the middle of it, one to the left, one to the right, and the other immediately upstairs, with future buyers ricocheting around the outside hall like the interior of a pinball machine.


Thanks to the confusion of signs, I’ve already found a nice gentleman at my door who rang hoping for a tour. At least he rang. Last year, a neighbor upstairs (whose neighbor was selling her place) was sitting happily in his recliner when he looked up to see a complete stranger walk right in.


On a different note, that year a former neighbor and his wife were scheduled for a walk-through. After carefully tidying up, then vacating, they returned after the allotted time and decided to hit the pool.


As it turned out, the real estate agent – without telling the owners - had rescheduled the tour for later due to a time conflict. While the owners were lounging on the other side of the complex, she and the potential buyers strolled through the carefully tidied home until they got to the bedroom, where the wife had flung her bra and undies across the bed and the husband had left a pile of clothes on the floor and his wallet out for the taking.