Last week was my maiden voyage with a local women’s golf league. Not pretty.
Not only did I not score my age, I didn’t even score the age of the majority of the residents in the local assisted living facility.


Let’s just say that hitting 30 strokes more than your partner could be a sign that your game could use some improvement. Remember in golf the idea is to get the lowest score. And what somehow made it a hundred times worse that day was everyone was so darn nice about it.


So for the past two days, in self-disgust, I’ve marched off to a nearby small course to practice by myself. The grass looks like it’s been mowed by attention-deficient sheep, and the benches have lost their paint; in fact everything there looks a bit down at the heels. But the good news is that anyone who can actually play the game is somewhere else. No golfer worth their salt would be caught dead there. So at 9:30 on a weekday morning I have the place pretty much to myself.


I didn’t see a huge improvement, although by the second day my game looked a bit less like a bocce competition and I did get a fair amount of exercise.


Tomorrow I have to go back to the Big Girls League for more humiliation fun, but I have hope. I just bought some magical new tees that I’m sure will make all the difference.


And at least I’m not the young man in the adjoining batting cage today who was there with two young ladies. I may feel a bit self-conscious at times playing golf, but it can’t be as bad as the pressure of being a teen trying to show off and being out-hit by two attractive girls. 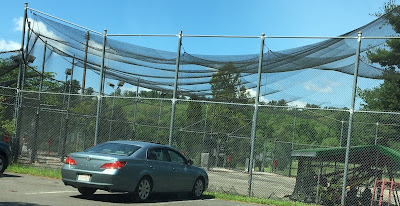