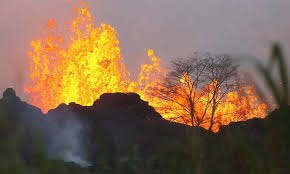 I remember sitting in my grandparents’ living room in Oklahoma, probably on a Saturday morning when there was no school or perhaps on a hot summer afternoon, mesmerized by yet another Tarzan movie. 1961 television didn’t have much to choose from in comparison to today’s offerings, but I was perfectly happy. Those old serials were just fine with me – Tarzan, Roy Rogers, the Thin Man movies. It probably had little to do with the family lore of one of my cousins having swum with Johnny Weismuller, but Tarzan was a favorite.


Maybe because of this, a child, gorillas were often in the back of my mind. It probably didn’t help that my older sister made me sleep closer to the window in our shared room, “if the gorillas come, they’ll get you first.”


Another dark fascination was lava, even if I was unlikely to encounter much in Arlington, Virginia, where I grew up, or Tulsa, when we moved to my grandparents’. Those natives in Tarzan's world, or alternatively, hapless explorers, were always crashing through the jungle, a searing river of lava right at their heels.


Here in Massachusetts, I couldn’t be much farther from current events in Hawaii unless I chartered a boat but I’m still captivated. And apparently we have a whole new vocabulary to go with it.


Lumb: a lava bomb, a projectile lump of lava


And lately another concern just occurred to me when I realized that Kilauea kicked into action on May 3rd, the day my sweet little twin granddaughters were born. For their parents’ sake, I hope this isn’t a portent of the level of excitement in the years ahead.