From Doctors to Baby Dolls

When you’re out of town for months at a time, something’s gotta give,
so today I had both a bi-annual check-up with my doctor, where you hear as much Portuguese as English, and a cleaning by my sainted dental hygienist Jenn, who numbs the daylights out of my mouth before she does anything.


In between I sandwiched a trip to the grocery store for the makings of a fruit salad for the semi-housebound new parents and diapers for the two causing that housebound condition.


I also hit the library to order 10 copies of The Book of Joy (not my usual cup of tea, but it was chosen before I joined) for when I host the book club in July, followed by a TDAP shot at CVS. For those of you out there with people in your life under the age of one, the key to this shot is apparently the pertussis portion, which sidelines whooping cough. If you’ve seen the ad on TV where Grandma turns into a wolf, that’s what it’s referring to.


I’ve filled my afternoon with sewing. I have twin beds upstairs in the loft, and rather than have the area in a state of perpetual bunkhouse, I’m making covers for them to make them look a bit more couch-like. 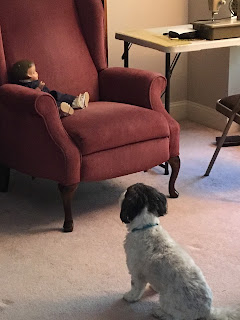 I was just cutting out material for the second bed when I heard a growl. Mamie must have decided that Patsy Ann, my mother’s doll that was also a big part of my life as a child, was a danger to us both. 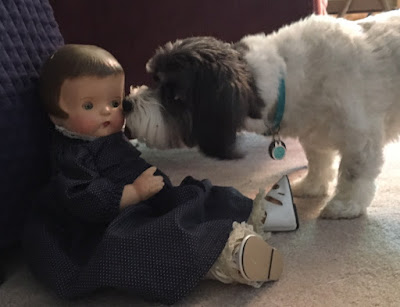 I put Patsy Ann down on the floor, and after a few wary sniffs, an uneasy truce was established.
Posted by Marty at 2:01 PM