I’m realizing the depths of my shallowness.
On the very precipice of Thanksgiving, after waiting since September 7th!!, my living room furniture has arrived at last.


When we moved to the condo from the house, we discarded furniture, gave away furniture, and re-assigned furniture, but it’s still difficult to condense everything from a 2,200 square foot house to an 1,800 square foot condo. From basically three living rooms and four bedrooms to two and two, respectively.


The designated area in the condo for a dining room became a den when we realized we didn’t need to reserve an entire room for basically two holidays a year. Now, hopefully, when family is here for the holidays we’ll have a room for televised international soccer and another for conversation.


We transitioned pretty well, saved by the mutual agreement that any overflow would go into the basement. Still, furniture that works in one home may not translate as well to the next. Case in point, my giant saggy red recliner. It, and it’s friend, my grandparents’ wingback, were just too big and well, red, for the new place.


The wingback is now living happily an hour away, and the recliner is gracing the growing basement man cave. Our coffee and end tables, not the best of the J.C.Penny line even when I bought them 35 years ago, disappeared two weeks ago, thanks to Craig’s List.


Until Friday, our living room echoed, furnished as it was by one couch and a folding table from the porch. Now I have chairs that Match! That aren’t inherited! Chairs that I went to a store and Chose! Not only that, I have new tables, unmarked by claw marks from Coolidge, our cat of the 1980s or tracks from grandchildren’s Hot Wheels!


During dull moments at the weekend writing conference, my mind would wander to the comfy blue recliner or the swively barrel chair.  It doesn’t say much for my depth of thought that a couple of armchairs can bring me to a state of Nirvana. 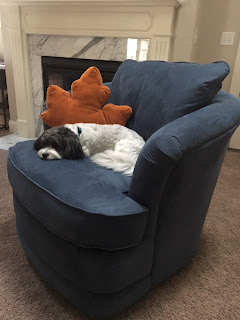 As you can see, Mamie is also beside herself with the excitement of it all.
Posted by Marty at 3:45 PM