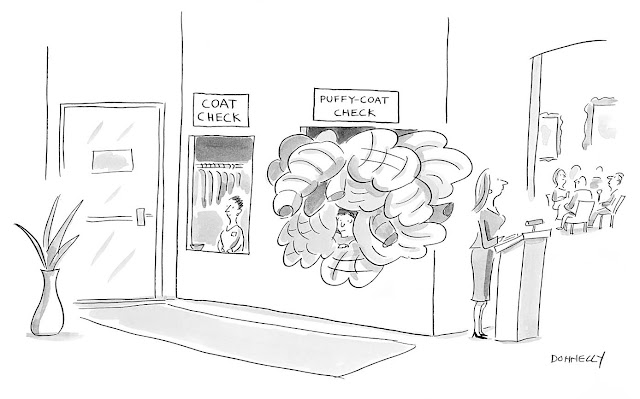 Mamie and I went to town yesterday, which means we drove one mile to the little village center for a walk. I thought it would be a nice break for her from the Mobius strip of sidewalks in our condo complex.


As usual, we parked in the small shopping area that’s made up of a bank, a pizza shop, an insurance guy, and a hairdresser, and then we walked from there to the library in back to drop off some books. She was thrilled to have new places to sniff and pee and trotted ahead of me, tail in the air.


Through the park with the Civil War statue, past the village coffee shop, and we were on the grounds of the private academy. It was a beautiful sunny day and the students were out in force, passing us on the brick sidewalks. A group of three were paused in front of one of the dorms and they caught my attention because two of the three were wearing camel hair coats, something I don’t remember seeing in a while and particularly not on 16 year-olds. An ankle-length version passed me a few minutes later. All I can figure is this is one more fashion trend I’ve missed, although it could be limited to the stratospheric income range of these students’ families.


These coats reminded me, though, of a conversation I had with my son-in-law over Thanksgiving. We both remember winter as a time when you just resigned yourself to being cold.


I have a good twenty years on him, but we both grew up in the pre-puffy coat, pre-Thinsulate eras. As a general rule, you only had one layer of wool and a shiny rayon lining between you and old man winter and you would just deal. That’s the way it was - of course you were cold; you were outside.


Maybe being cold from November through March toughened us. What with the need to get through the cold from point A to point B as quickly as possible, we might have even been in better shape since everyone probably walked faster then, too.
Posted by Marty at 5:21 AM