Broadway on the Gulf


We’ve been meaning to get to the Venice Theatre, one of the largest community theatres in the country. Last night we saw Crazy for You, “a madcap story with the Gershwin brothers’ musical magic.”

The sets were as good as some I’ve seen on Broadway, with a Broadway backdrop that turned ingeniously into Deadwood, Nevada, and the costumes were just as professional.


The company itself was just as good, everyone was (mostly) on key, the dancing was excellent, and there was none of the hesitancy you sometimes see in amateur productions.


What took getting used to was two of the female leads were well past their prime, playing roles intended for someone at least 10 or even 20 years younger. It strained credibility when a thirty-year-old was supposed to be engaged to a woman better suited to play his mother.


Also, the heroine was a bit on the hefty side, probably outweighing her fellow lead, a guy built with less heft than Fred Astaire (but dancing almost as well). I worried about him during their twirls when he would have to heave her into the air. In fact, several of the chorus girls were a little chunky, although that didn’t appear to slow their dancing.


But the singing and dancing was fabulous, even more remarkable when in reading the program I learned that much of the chorus came from the local high school. This was a production that covered all ages and abilities and everyone earned their spot on stage.  By the time the show had ended, it seemed perfectly natural that one of the players was wheelchair-bound and I forgot that some of the romantic leads were closer to my age than my daughter’s. 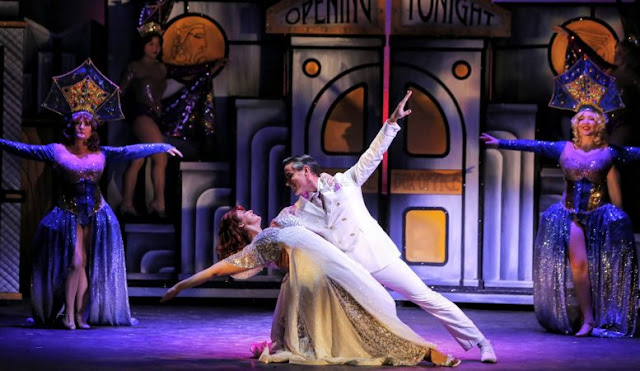