If my refrigerator could talk 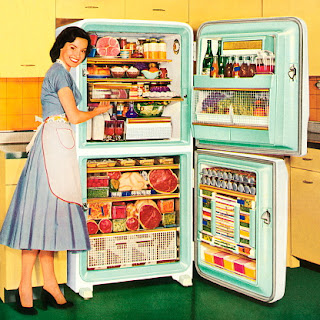 If, through some unlikely series of events, a person had lost his calendar, all access to the internet or any other media, and had been living on an uninhabited mountain top, he would only have to check my refrigerator to know that Thanksgiving is coming.

No, not because a giant bird resides there – that’s in the small downstairs fridge that is usually only turned on for November and December.


This is the time of year that my kitchen fridge puts its best foot forward, and that doesn’t just mean wiping off the shelves and the handprints from the door.


First of all, in spite of the backup in the basement and the porch (one benefit of our sudden plunge in temperatures is that now I can store all the drinks and completed pies out there), space is still at a premium. So out goes the milk that’s on the verge of turning but would still have been okay to make pudding. Who has time to be whipping up pudding? Same with any iffy vegetables that won’t be required for this weekend’s turkey noodle soup. Rubbery apples will be thrown into the woods as a holiday gift to the deer.


Next, the dribs and drabs in jars get evaluated. With no idea of the last time I used those sun-dried tomatoes in oil and only four remaining maraschino cherries, I empty them and add the jars to the recycling bin. I’ve just gained real estate that could accommodate two soda cans.


Finally, I don’t need any visitors to my kitchen to know about my belief that the dates on yogurt containers are just suggestions. Push the outdated ones waaay to the back to eat next week, place the new tubs front and center. Turn the egg carton around so the “Best by Nov23” isn’t visible. Finish off the borderline cottage cheese for breakfast (with those four maraschino cherries), check the cheese drawer for anything green, and I’m ready to bare my fridge to the world.

Happy Thanksgiving!
Posted by Marty at 6:23 AM