I am the Keeper of the Windows at our house.
We only have two window air conditioners, with another parked in a closet that due to procrastination may not see the light of day this summer. We’re in a heat wave here in Massachusetts, with temps and humidity not that different from my childhood summers in Virginia. So the windows go up in the morning, down before noon, air conditioners on until evening, and then if it’s cool enough, I open every aperture I can for the fresh air we prefer. When I go to bed, I close all breachable windows and shut the house doors (we have a history extending back decades of my husband wandering off to bed and leaving the front door not only unlocked, but wide open). 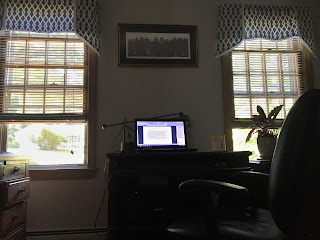 With another day forecasted to be in the 90s, by 7:00 am today I was traveling from window to window to catch the early morning cool from our woods. I then sat at my computer, which sits between two windows facing the front yard, and watched the squirrels dig tiny squirrel holes in the front yard, the chipmunks scurry on their way to eat another hosta, and the hummingbirds buzz in for another blast of sauce at the feeder.


At that moment I was no longer a grandmother in Massachusetts. It was a summer morning in Oklahoma and I was eight years old.


Most summers my family would pack up the 51 Ford and drive from Virginia to Tulsa, where my grandparents lived. And every other summer morning or so my grandfather Woods would be at the brick barbecue in the far corner of the back yard burning trash. ( I never saw the barbecue used for anything else. In fact, that prosperous neighborhood of lawyers and oil men would probably have thought it bizarre to be cooking out of doors.)


So in the early morning quiet, before the advent of air conditioning, I would wake up in the room papered with pink roses and gauzy curtains, and traces of smoke would blend with the coffee and bacon smells rising up the stairs from the kitchen.


I don’t know which of my neighbors today was defying the pollution police, but I’m grateful for that sniff down memory lane.
Posted by Marty at 2:23 PM