Horror in the dentist's chair


You could say last week was a festival for my head: first the ophthalmologist, then the dentist.


Thankfully, I was only having my teeth cleaned. That still used to be traumatic for me, however, until I landed in Jenn, wonderful Jenn’s chair. The sadistic needling spray that cleans my gums – and detonates every possible nerve ending – used to make me consider just driving right past the office on appointment day. But now Jenn, glorious Jenn, first paints numbing goop on every inch of my mouth and I’m good to go.


I also like Jenn because she is perfectly content to clean my teeth in complete silence, but in between the poking and rinsing we do chat every now and then. I’m not sure how it happened, but this trip evolved into ghost story time around a campfire. It might have been a sunny day at 11 in the morning, but by the end of the session we’d both experienced a good case of the heebie jeebies.


It began with her story of moving a book on a shelf one night only to find a mouse staring back at her. This was instantly followed by a shriek, slammed doors, and a phone call to her husband who was working third shift.


I countered with the two times I woke up to find a bat circling the darkened bedroom, and capped that with memories of living in a low-rent apartment in Georgia where I had to shake out my shoes before putting them on. That place was inhabited by not only GIANT flying roach cousins, but also tiny lizards.    I preferred the lizards.


Jenn won, though, with her spider phobia.


Spiders, I thought. How bad can spiders be?


It seems that when she was a child her family lived in the desert out west. Since it was often too hot to be in the yard, so her mother would tell the kids to go play in the garage where it was a little cooler and they could be out of the sun.


“But don’t go near the freezer in the corner. Black widow spiders keep building their nests there.”


She and her sister obediently never went near the freezer so all was good.


One day when she was about 3 years old, she was sitting on the cool garage floor playing jacks. Waiting for her turn, she leaning back, putting her hands behind her.


She felt something soft, maybe kitten-like.


She turned around, and there squatting on the cement in all its hairy glory was a tarantula . 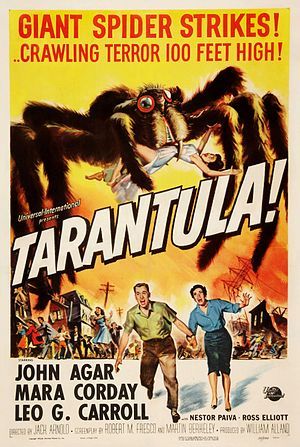