All of life is learning 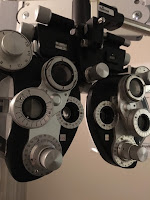 This week included my third visit to my eye doctor.


To clarify, my third visit to any eye doctor – ever.  When you spend the majority of your life with 20/20 vision and then the next twenty years only buying cheaters at Staples, a regular eye check-up isn’t an intuitive activity.

After driving through a rain storm one dark night, I was sufficiently paralyzed with fear to hot-foot it to an ophthalmologist. Now I have big-girl glasses for driving and watching TV.


So I had an appointment at 9 a.m., plenty of time before my golf lesson at noon. I was soon ushered into a room and seated by a lazy susan of increasingly strange machines. The technician, (about 30 years my junior) who was very much into the “honey” and “darlin'” form of address, instructed me to place my chin in the first one, saying “Now you’ll feel some air.”  A POOF of wind hit my eyeball, like some kind of ophthalmologist prank, surprising me in spite of the warning.


The machines rotated again and now I was to look at a teensy picture of a hot air balloon. At least this didn’t have the dreaded blast of air, but darned if I could tell what it was supposed to be doing. Turned out, I have excellent eye pressure; I sat up a little straighter at hearing that, experiencing an odd sense of accomplishment.


Once we finished with that, she swiveled, and with a gesture worthy of Vanna White, directed my attention to a big square machine squatting in the corner. Apparently, this was an alternative to having my eyes dilated. Well, that sounded pretty good, thought I – and then she added that it was an additional $39. . .which wouldn’t be covered by my insurance. Dilation it would be; I’d never had this done, but it would just be a few drops, right?


Now it was time to see the doctor, a pleasant German lady. She congratulated me on my great eye pressure and I tried to look modest. Next were the drops, startling to someone who only gets that close to her own sockets to apply eye liner. 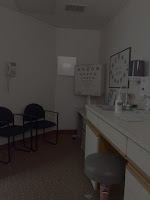 I was ushered to another room and left in the dark (literally) for the drops to take effect. Maybe if I’d done drugs in the 60s like any other self-respecting baby boomer, I could have enjoyed some moments of happy nostalgia. Instead, it was like being dropped into Monet’s career, as the room became increasingly impressionistic. 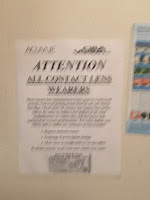 The legs of a nearby chair grew fuzzier and fuzzier, and the eye chart directly across was enveloped by a mist that Carl Sandburg and his little cat feet would have been proud of.


After 15 or so very boring minutes, mein Doktor returned to my soothing dark cave and whipped out her tiny flashlight and spent the next ten minutes shining it two inches from my face. And here I’d always thought the whole reason they issue you those snazzy plastic sunglasses when you depart was to protect your eyeballs from bright lights.


I felt my way to my car and silently blessed its previous owner for the drug-dealer smoked windows. I took a right out of the parking lot to a quiet side street to avoid the busier option. Stretching before me – what I could see of it – was a mine field of protrusions. The street was in the middle of being resurfaced and every single manhole cover, gas connection, drain, and I don’t know what-all was raised several inches above the pitted surface.


In my ignorance, I had always assumed eye-dilating drops wore off about as fast as, well, Novocain after the dentist. Not so. Let’s just say that my noon golf lesson on that sunny, sunny day was a learning experience on more than one level.
Posted by Marty at 5:48 PM