It took 46 years of marriage, but the day has finally come.
My husband, the man who had never seen an artichoke till I married him, and who learned to eat asparagus and rutabaga with a smile, is facing his Waterloo. Over the years, he’s pulled up his chair to the table willing to try anything. In fact, his first meal at my house when we were dating was buffalo (My father was on a buffalo kick that year and the Safeway was running a special.) His acquiescence back then, though, was the 1969 equivalent of dragging back a saber-toothed tiger to prove his worthiness.


I’ve been able to talk him into anything (food-related, at least) except beets. He’s been such a paragon of culinary adventure I never pushed the whole beet thing. I knew how lucky a food lover like me is to have not drawn a meat and potatoes guy in the lottery of matrimony.


So guess what was in this week’s farm share? Yep. 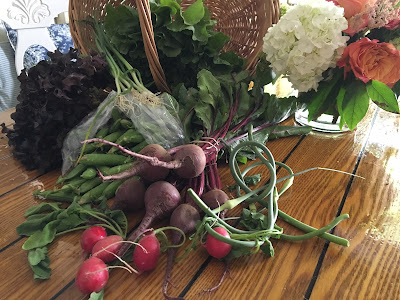 FYI – if you’ve never eaten a pea straight from the pod, you haven’t lived a full life. Somehow they’re buttery and sweet; I think I’ll only allow them to dip their little green toes in a saucepan for a few seconds.

And bless his heart, my husband not only asked me how I planned to cook the dreaded beets, he said he’d try them.

P.S. - I'm still not coping very well with those garlic scapes.
Posted by Marty at 12:52 PM