As I sit here, even though there’s not a breath of air in the trees, the leaves of the mountain laurel outside my office window are fluttering away. It’s not a teensy, tiny microburst, but rather the hummingbird who has become my new BFF.

I have a couple of gladiolas out there that I completely forget about every year until I look out and say, “Hey! I’ve got gladiolas!” Sadly, this is about par with my not-finger-on-the-pulse-of-my-garden horticultural skills.

Then again, this perennial event has the same upbeat outcome of my aging brain losing track of other things; every day (or garden) is a new and happy surprise. 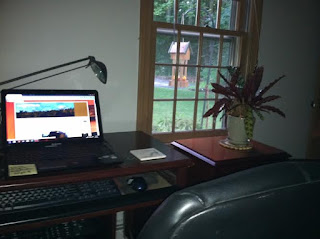 While the gladiolas’ blooms lasted, I could enjoy several days of hummingbird visits, but once things were finished, so were my air shows.

This year I had an epiphany, and remembered a feeder that had been tucked away in the recesses of the garage, a victim of forgetfulness + inertia. 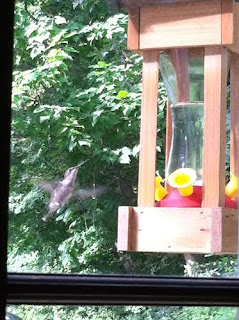 As Ranger Google instructed, I boiled up some water and sugar, let it cool, and filled the feeder’s reservoir. It only took about a day, and now I’m the hummingbird headquarters of happiness. They're hooked.  I have at least two that visit, sometimes several times an hour.

My mother used to say that if she came back as an animal, she wanted to be an otter, because they always look like they’re having fun. 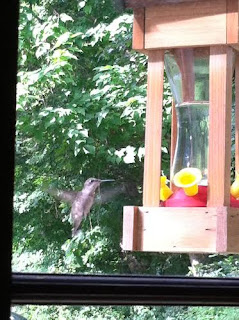 It occurred to me the other day that if I came back as a hummingbird, I could finally realize my childhood dream of living on nothing but sugar.

So there, food pyramids and balanced diets!