Yesterday we zipped over to Martha’s Vineyard.

Well, we zipped over after an hour’s ride to the Steamship Authority’s parking lot in Falmouth, found the shuttle, rode it to Woods Hole standing up for twenty minutes (in a bus so full I looked around for peasants holding chickens and goats), and then filed onto the ferry. 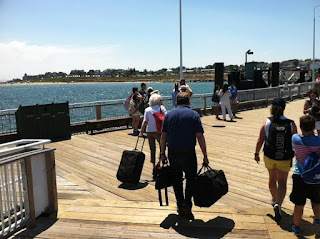 The distance from Woods Hole to Oak Bluffs on the Vineyard is quite short, but it was a darn big ferry loaded with cars and people, so we weren’t exactly hitting warp speed. Still, it only took forty-five minutes and then there we were, unloading with people carrying beach umbrellas, suitcases, and children. With no bridge to the island, if you want it, you bring it. 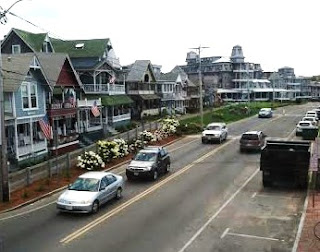 Painted Ladies of San Francisco’s hills, popped in and out of over-priced gift and clothing stores, dodged the other tourists on the skinny, skinny sidewalks, and finished our day with a good lunch and tall drinks while looking out over the harbor.

People watching was a major portion of the day and it occurred to me that over the past 4 years I’ve been spending most of my time with the over-50 set.
This realization arrived with my almost voyeuristic fascination with all the youth around me. The tiny shorts, the skimpy tops, and all that perfect skin. Inhabiting my own blotchy, bumpy body has given me a new appreciation for how fresh and unused are the hides of some of the rest of the world.


Ah well. In ten year’s time I’ll probably think nostalgically about the shape I’m in now. Looks like today had better include a long bike ride.

And today's shameless plug from  ->
is:


Lila Wallace weaved and dodged through the chaotic high school hallway as the late bell rang for class. Just like the five other times it rang each day, it had practically no effect. The couple locked in an embrace stayed clinched, the two girls near her continued to shriek happily to each other, and the three young men by the double doors carried on using the frame to do chin-ups, blocking anyone hoping to pass through and actually get to class.