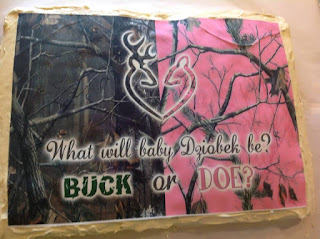 Last night we attended what for me was a new phenomenon. Our nephew and his wife recently announced their pregnancy and they held an event for the family known as a Gender Reveal.

This is a world far different from the one we knew in 1972. My husband was in the army, stationed at Ft. Ord in Monterey, California. He was a somewhat newly minted lieutenant, having received his bars two years before at Officer Candidate School at Ft. Benning, where our daughter was born.

All the other young officers were also starting their families and so inevitably when the wives gathered the conversations were fairly predictable: toilet training, when to start solid food, or the child care services on base. Another topic making the rounds was what I suppose we’d now call an urban myth – determining the sex of your child. In those days we were still basically writing on our cave walls. Ultrasounds were far off in the future.

Much has faded to distant memory, but I do recall one theory involving peeing on Drano to discover whether you were carrying a boy or a girl.  I can’t remember what was supposed to happen, what color it should turn for which sex, but looking back, it all sounds a bit hazardous.


You could also try to take control from the start if you wanted either a boy or a girl.  This was all about timing, baking soda, and temperature. I’ll spare you the details. I will admit that there was a phone call requesting a certain young lieutenant return home from the base at noon one day and that nine months later he was happily buying a baseball bat to bring to the hospital.

Last night we were all issued tiny pink or blue clothes pins, depending on what we thought the gender of our niece’s baby might be. We filled in a calendar with our prediction of date and time, and someone even started a pool of five dollars each to make it even more interesting.


The cake was both blue and pink, so there was no indication there. We had to wait until a bowl of water was produced and an innocent looking rubber duck with some gender-revealing baggage on board was lowered into it. 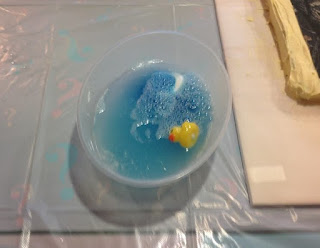