We had dinner Sunday night with our long-lost son and his (fingers crossed hopefully on my part) fiancé. Long-lost because he lives barely an hour and a half away in Providence, Rhode Island, so of course we’ve only seen him once since Christmas.
That was for a very brief overnight since he had an early-morning meeting in Hartford. Our daughter, who lives four hours and three states away, we see about once a month. I’m sure there’s logic in there somewhere. 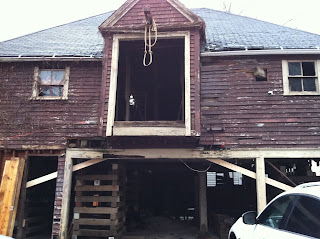 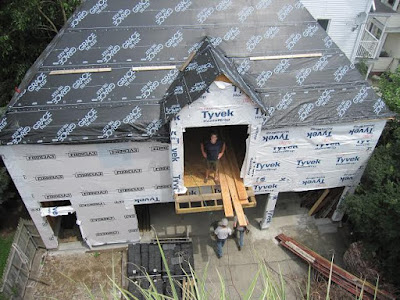 Our son is busy covering the East Coast for a new account and managing both of the three-family homes he owns in the city. Oh, and he’s also restoring the carriage house (a massive project I should probably write more about some other time)  in back of one of the houses - the 1890’s home where he lives on the top floor.

Until recently, he was also selling real estate and working twenty hours a week as the director of the Providence Tree Planting Program, so I guess all that does keep him off the streets.

His apartment is the smallest of the three in the house, but he’s made the most of it. We sat in his living room as the summer breeze floated in through the French doors that sit where a tiny window used to be and which lead out to the small two-layer deck he built on the roof. From it you can see across the rooftops to the capital building in the distance.

His neighborhood is teetering between gentrification and gangs. That night gentrification seemed to be winning as we watched people stroll by on their way to the coffee shops and trendy restaurants that are springing up all over. We chose a vegetarian place a few blocks away and I tried not to look too suburban as people settled around us in batik and tattoos. I took comfort in the fact that I had on my sensible earth sandals. Proof of how far my husband has evolved over the years is that he had a fried Portobello sandwich masquerading as a fried oyster po’boy and not only ate it, but did so enthusiastically. My dinner was wonderful, too; how can anyone not like pierogies? and there were all kinds of other vegetarian goodies to make up the rest of the plate.

We had a fabulous evening, and got caught up on family news. But in this relentlessly healthy environment I was still intimidated enough that I didn’t dare to ask the waitress dressed all in black with Olive Oil-style boots for processed sugar (never mind Equal!) to put in my iced tea.
Posted by Marty at 5:19 AM