For the past three days I’ve been entertaining a yardfull of big, sweaty men. 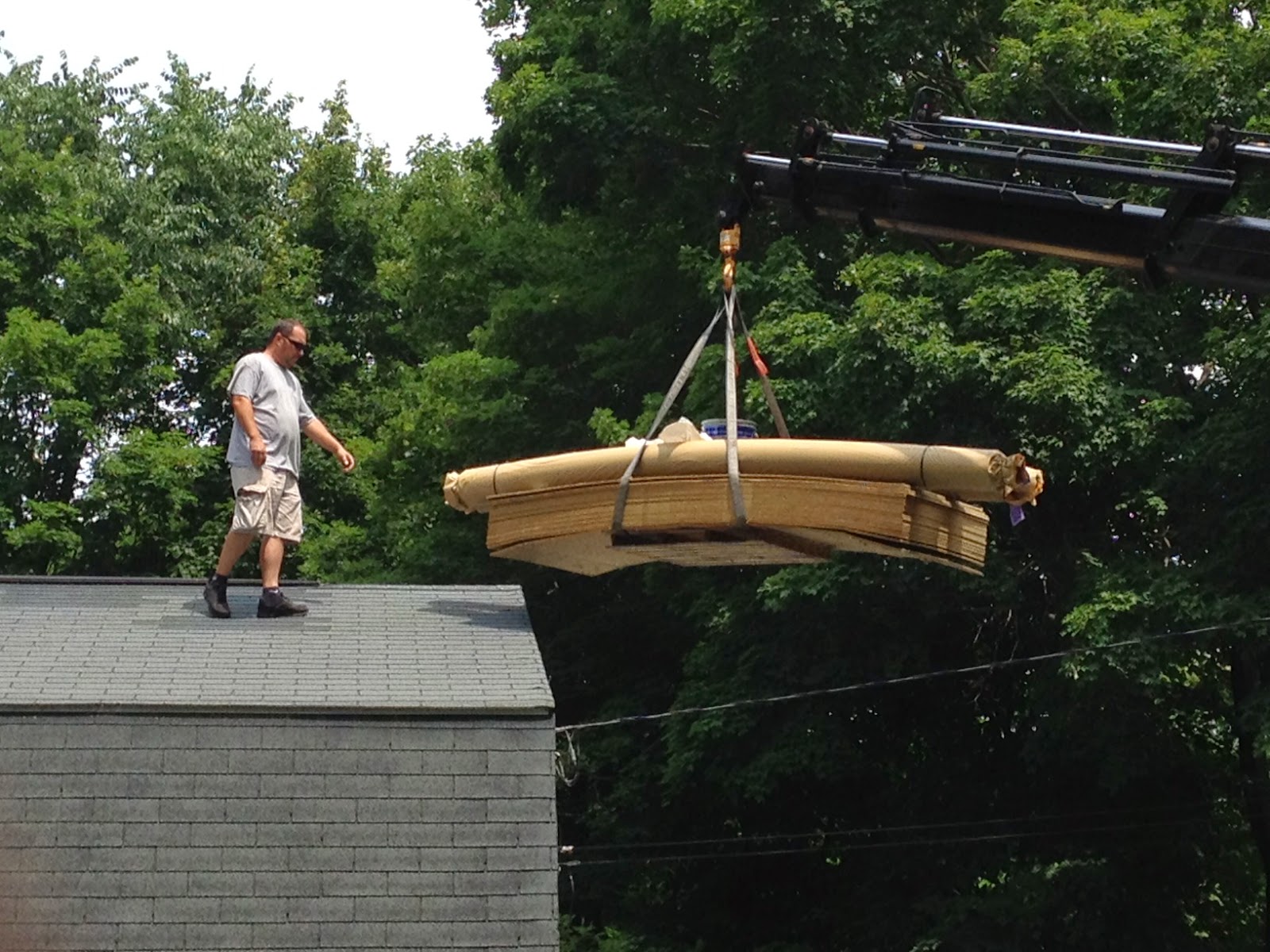 Well, actually, my house has taken the larger role - or to be more specific, my roof.

The first stage was probably the most exciting, even death-defying, as waves of black shingles rained down past the windows from two stories up – or three stories up in the back, which is on a hill. Satchel stayed indoors, and therefore spent a fair amount of time grumpily stalking around the house yelling at us. 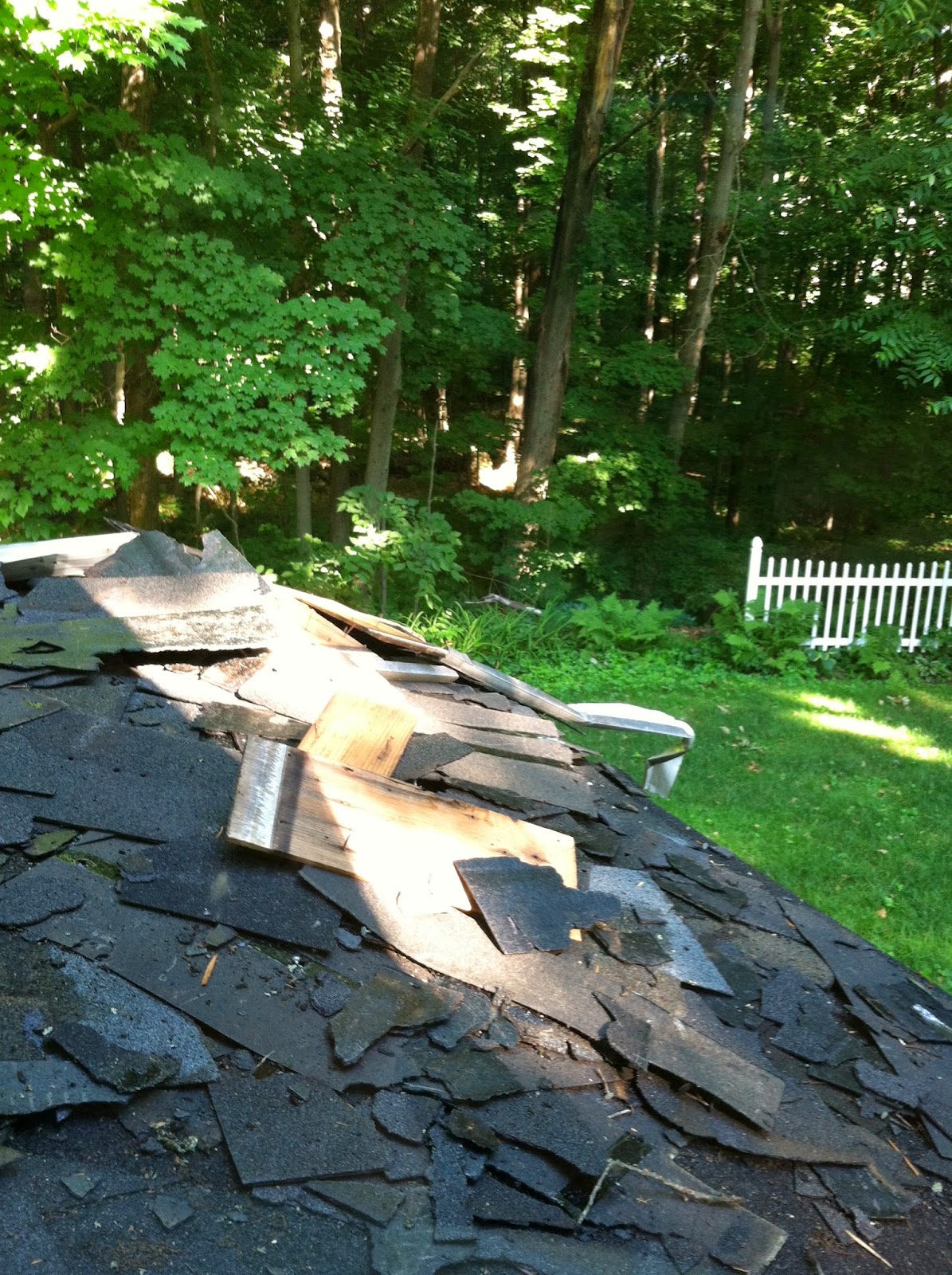 We didn’t relent since sending an elderly black cat to dodge flying objects and nail guns didn’t seem like the wisest choice. The one thing in his favor is that we suspect he’s profoundly deaf, so rather than cowering in the basement like any normal cat, he gave up and napped undisturbed. 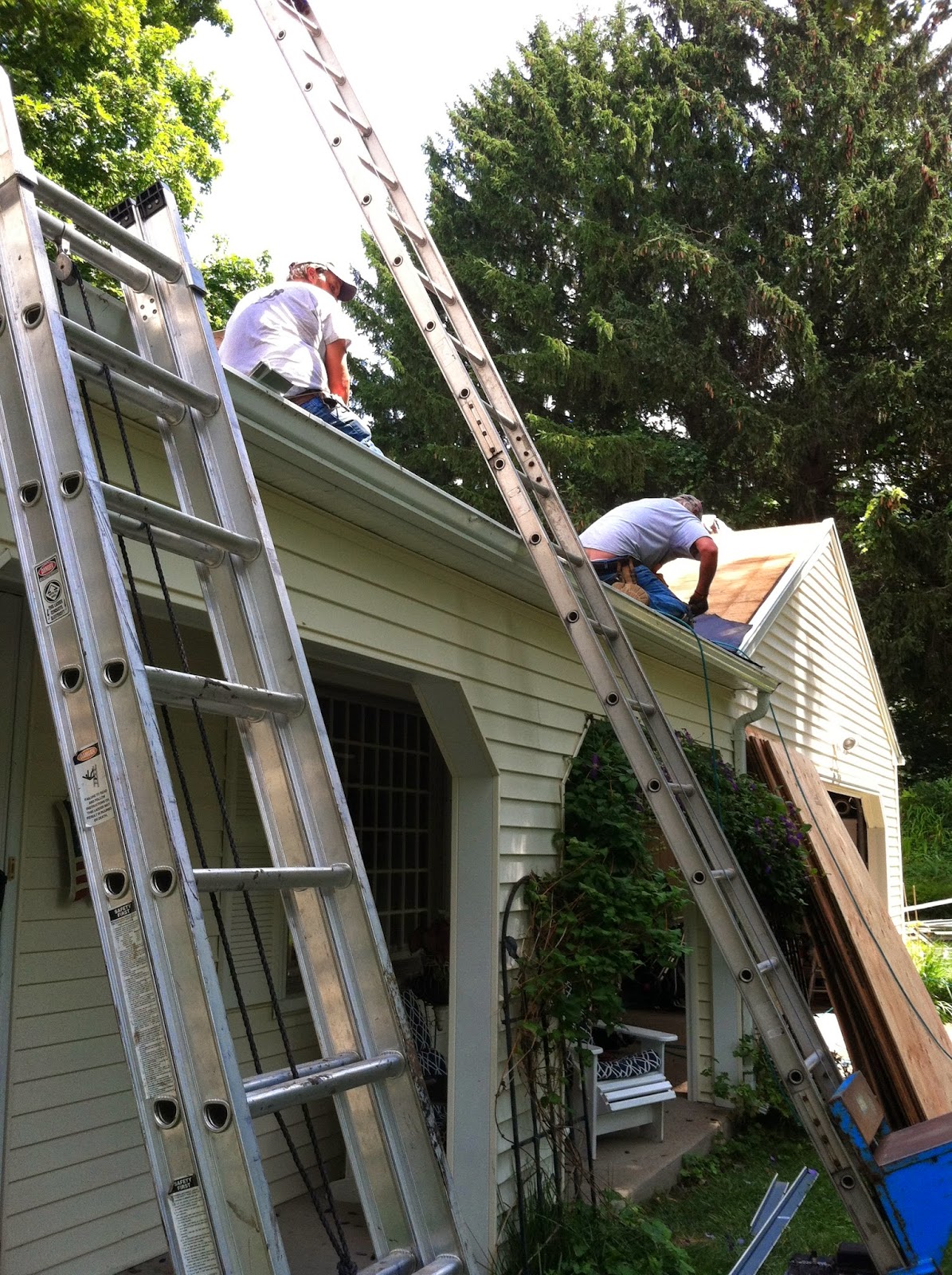 Fortunately, I did have events away from home and was able to escape the chaos every now and then.

Unfortunately, I had to shower to do so. It can certainly sharpen your attention when you’re all soaped up and the banging directly above your head makes you very aware there are only six inches between you and a brand new friend. 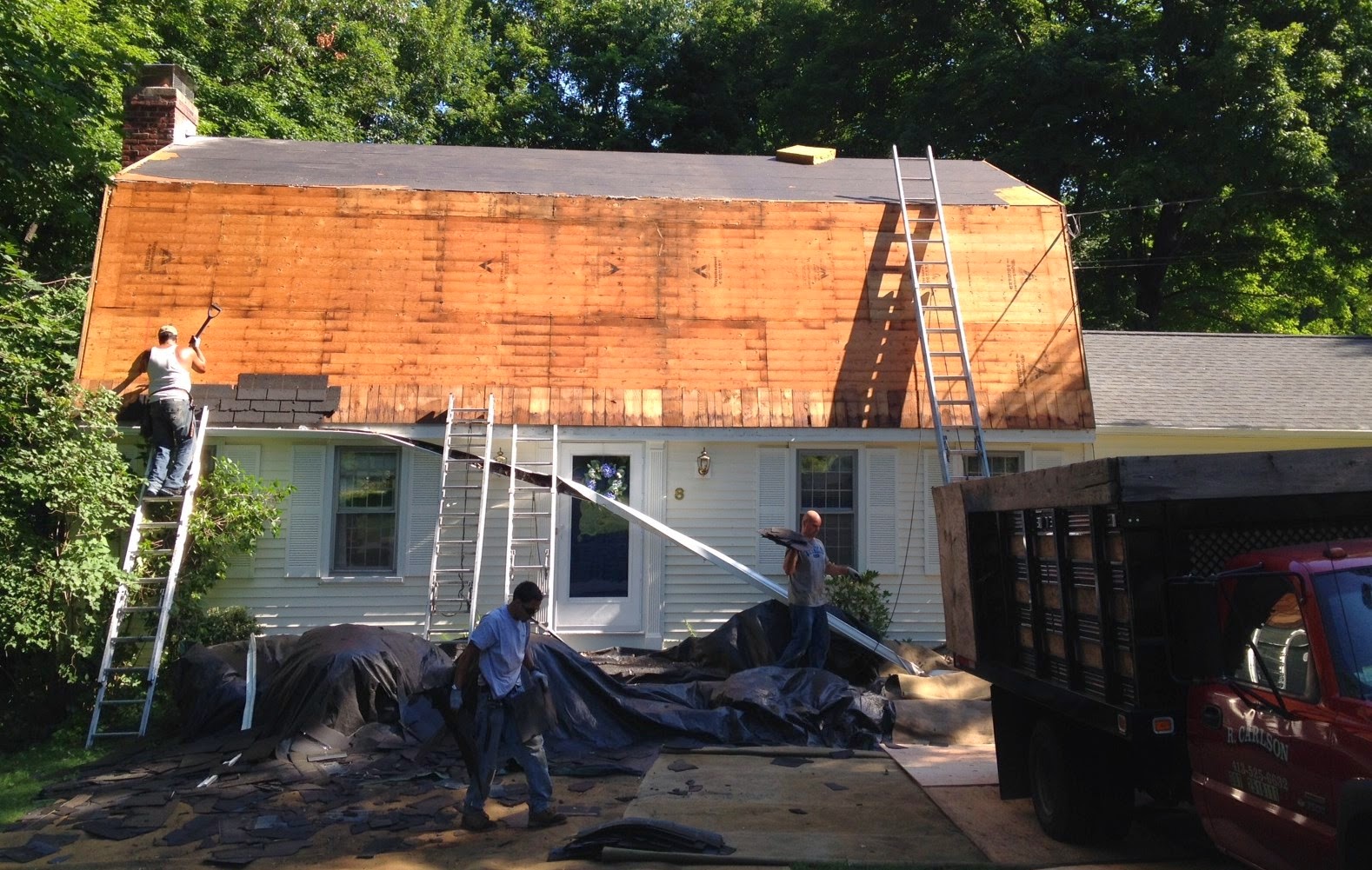 After the second day, in which we ran huge jugs of water to them and tried not to notice the cigarette buts on the lawn, we watched as they quit for the day and drove off. Tools and the next day’s shingles were ranged about the yard. Among them was a nifty device for picking up nails. Several times a day we had looked out to see one of their crew marching around the yard with it. We thought, what the heck, even though he’d obviously already cleaned up any stray nails, we’d see how it works. 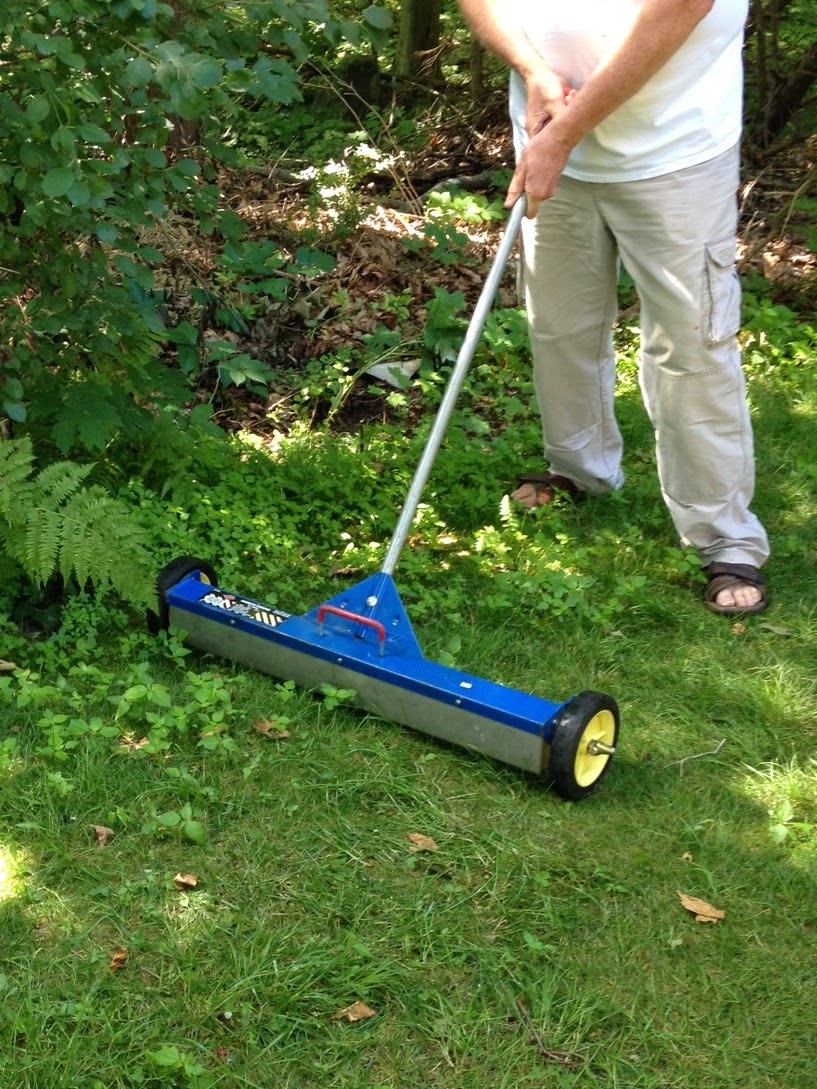 By the time we were done we had filled a large cup half full with nails. My flip-flops are now next to the door at all times.

The third day I woke at to the “beep, beep, beep” of an industrial truck backing up. Backing up close. Really close. I leaped out of bed and told my husband to get his pants on.  “You’ve got to get out there! They’re driving over the well in the front yard!”

That was soon sorted out, but I was happy to have my morning booked with more off-site activities. Before I left I filled the giant jug of water and dug out more paper cups. 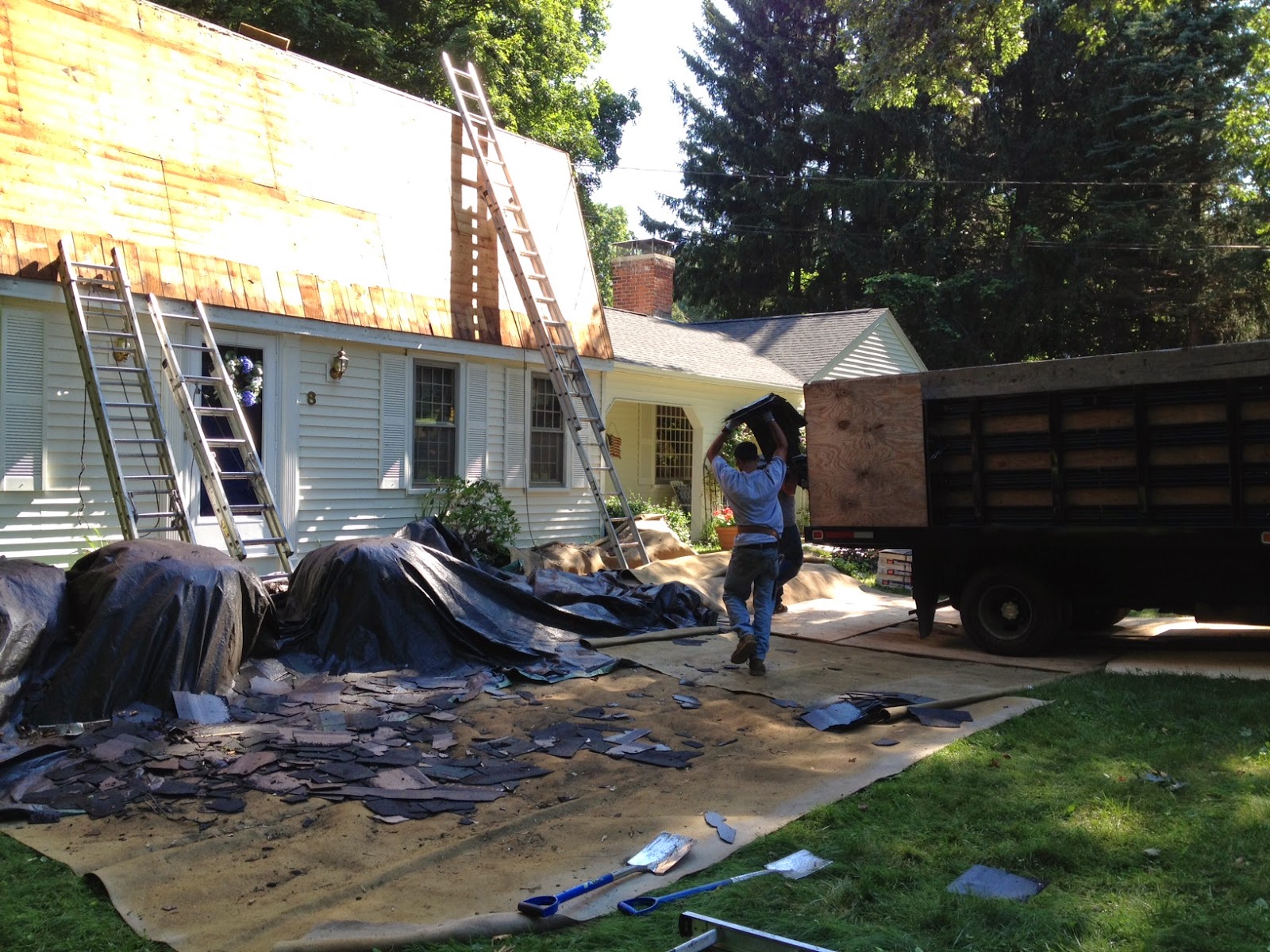 I had learned the only way to exit the house was through the garage, since every single door was blocked with tarps strategically placed to catch shingles – and kill the plants beneath them.  I picked my way across the war zone of a driveway and front lawn to my car out on the street and made my get-away.

The roof is now done. We no longer have those five quirky shingles in front that on a hot day drooped like a Salvador Dali painting, and February ice dams are, with any luck, a thing of the past. The grass in the front yard will lose its washboard configuration (truck tires) with time –I hope - and the plants around the foundation should recover –I hope.

But it will still be a very long time before I go barefoot again.