Will someone explain the obsession with feet? 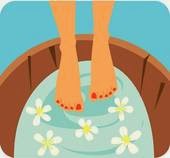 I’m not talking about those foot-fetish people who skulk around smelling strangers’ shoes at the bowling alley.

Now it’s considered no big deal to drop $40 for a session with a stranger who will bathe and massage your feet while you sit enthroned on a tall chair equipped with its own whirlpool. They then take out a battery of instruments to pick and saw away until an hour later when you crab-walk out with fuchsia toes and the feet of a newborn.

I miss the days when my mother would slap some Heartthrob Red onto her toes and be done with it. And that was only in the summer. In the winter, who cared? No one outside of family would see your feet anyway.

I wonder if what we have here is some new version of status. You know, like when Chinese aristocrats would grow their fingernails so long they were unable to perform the simplest functions for themselves, thus proving that they were rich enough to afford servants.

Years ago, a smooth handshake was evidence that you had never stooped to anything as sordid as manual labor. Now women aim for feet so soft we might as well have lackeys carting us around on their shoulders to save us from the ignominy of a callus or two.

As I set to it with my pumice stone and mini cheese grater, I grow nostalgic for the days of my youth when one of my greatest points of pride were the calluses that made it possible to cross my Oklahoma grandparents’ tar road barefoot at high noon in July.
Posted by Marty at 1:33 PM