Putting Some Order in My Life

I was at ’s yesterday trolling for Christmas gift inspiration. I did manage to score a few things and took them to the check-out counter. It was quiet in the store – as a contented retiree I’m able to shop at a time when the rest of the world is dealing with ringing phones or maybe telling their students that staring at their crotch either means they need to put away their cell phones or they might have a bigger problem.

As the cashier rang up my purchases, she placed each one neatly to the side of her. Last came a scarf I had bought, and she added it to the pile. It was a bit folded, apparently not lying neatly enough for her, so everything stopped while she carefully straightened it out, and after a full thirty seconds she achieved a tidy square. She looked up at me sheepishly, and said, “Sorry.” I told her I understood perfectly, that I probably would have done the same. We talked about the need for order. No surprise when she said she was the youngest of thirteen, and an army child to boot. If only I had such a clear-cut explanation.
We were out for lunch when the grandkids were here recently and the table looked like it inevitably will when the majority of your dining companions are under the age of eleven. There were the restaurant’s gifts of crayons and worksheets scattered about and an occasional toy car and errant mitten. The waitress worked her way around the table, taking our orders, starting with my daughter, then me. Here’s the thing: she and I were done with our menus, so I put mine in the center of the table, starting a pile so the waitress could pick them all up at once. I waited for my daughter to do the same. And waited. I added my husband’s to the pile after he ordered. And waited for my daughter to add hers. I found I was almost drumming my fingers on the table, my need to stack was so great. I finally took hers and placed it on the others, and then gathered up discarded worksheets and returned rolling crayons to the original owner.
The problem is obviously me. My daughter was perfectly comfortable there with the happy flotsam and jetsam of life about her while I was practically gnashing my teeth. And we won’t even mention my love for a clear desk and an empty kitchen sink. 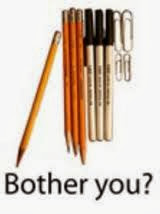