When Home Projects Bring on the Blues

I woke up today with no great expectations. The only definites were breakfast and the Sunday paper. Yesterday I’d pulled weeds and trimmed bushes, so probably no gardening today.

Like many mornings, before I’d even had my cup of tea I’d stripped the bed, put on new sheets, loaded the washer, emptied the kitty litter box and fed the cat. While waiting for Himself to return from his coffee run I knocked out a few pages of the new book – I’ve almost got the kid out of the well and yes, his name is Timmy. Then breakfast, paper and now time for a Project. Not a big one, just something to fill maybe 45 minutes.

I’ve been meaning to touch up our front doors for quite a long time. In fact, when I dug the paint out of the basement and recovered from the excitement that I actually still had the paint, I read the can and discovered that the last time I used it I was ten years younger. I guess I’ve had this project on the back burner for a while. It needed to be done; this spring the furniture delivery guy left an eight inch gouge in one of the doors when he carried off our old couch. I was so thrilled to be rid of that old cat-clawed item I brushed away his worried apologies with a magnanimous smile.

So I washed both doors, then wiped the first down with deglosser, which helps the new paint bond with the old. So far so good. I laid newspaper on the rug – wouldn’t want any drips! - in the front hall, gathered my brush, paint, stir stick and a roll of paper towels. I told myself that even with latex it’s good to have something handy if you should get a little on your hands or perhaps allow a bit to dribble over an edge. Although I was sure that wouldn’t happen.

I put on a favorite CD and began painting. I started at the top and was pleased at how well things were going. Since the door was only chipped in a few places, this would take no time at all. I held the quart of paint in one hand while I painted but found it was getting a little heavy as I stopped to go back over some spots.
So I put it on top of the bookcase to my left, thinking that some people might fuss at my placing it there, but I knew it was fine. I went on painting happily, listening to music until I was distracted by something to my right, a movement beyond the outer glass door. I looked out, placing the can on the bookcase as I turned.

You’ve gotten ahead of me, haven’t you? Yes, the can was NOT squarely on the bookcase and came crashing down and splatted at least half the can smack on the wall-to-wall rug. I’m sorry I can’t provide you with a photograph of the shiny blue puddle, but life speeded up a bit at that point.

Let me just say that I have learned the value of always having a spare roll of paper towels in the home inventory. I also now appreciate my original genius of matching my front door to the hall rug. 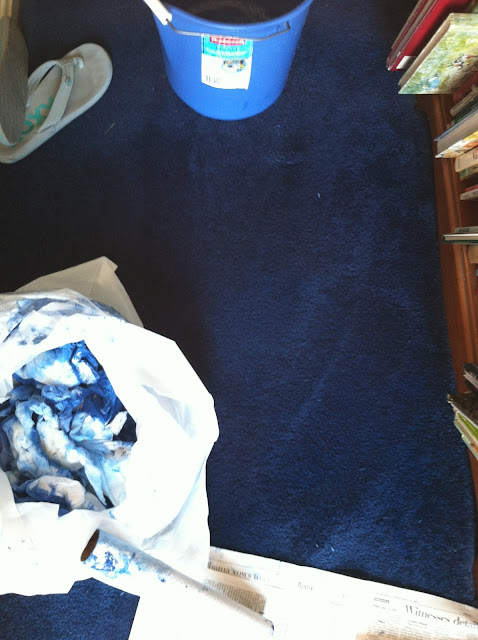