Time for a new entry for Five Minute Fiction at 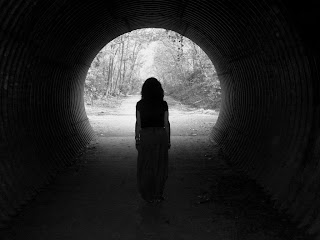 This week's topic is View

The music was muted, the room softly lit, but as the woman passed their table the moment dimmed; the wife had seen that familiar shift in his eyes as he smoothly continued their conversation, “Yes, we’ll definitely have to plan that trip this fall, maybe October?”

To his credit, he had always distributed his charm generously, making sure that she received the greater share of it.
At home he would flash his lopsided smile as he asked her about her day, brushing a hair from her face with his big hand, resting his palm against her cheek.

Time had passed, they were still together, and they sat in the doctor’s office hearing, “Retinitis pigmentosa,” but with or without the fancy name the end result was the same, tunnel vision.

And now she realized she truly was the center, the whole, of his world.