Encounters of the Golf Kind 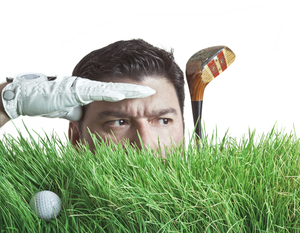 It was a perfect summer day and my golfing partners in crime and I had decided to meet for a game. We only began playing in the middle of last summer and are pretty evenly matched. Much of our conversation, when it’s not about our children, husbands, or home repair and renovation, is usually, “What club should I use?” “How do I stand for a pitch shot?” and “I love your golf shoes!”
As retired ladies, we’re also fortunate to be able to play on weekday mornings, thus avoiding heat and crowds. This also leaves time for the most important element of golf - lunch.
Since we’re not only raw beginners (a title we do realize we’ll have to stop using at some point) but cheap, we play on a small par 3 course and it’s about the same as your basic rural cow pasture, only not as well groomed. Also like your basic cow pasture, it’s usually empty of any other humankind. Until that morning.

We had teed off at the 5th hole and many strokes and divots later, had finally achieved the green. For the non-golfers of you -  which I was a few months ago - that’s the circle with the flag and the hole.We were approached by one of a party of men who were playing a hole near ours. A par 3 course is like a Reader’s Digest version of a normally sized course, so their area of play was very close to ours.
He said, “Have you seen my ball?”
We made noises like, “Oh, too bad,” “Nope”  “No, sorry. Haven’t seen it,” and pulled out our putters.
He continued to ask us, not really listening to our negatives. We were all reminded of other male-type people that we knew who were occasionally listening-challenged.  I wondered if he expected us to toss aside our putters and join in the search because he persisted in circling our green, peering to the left and the right.
The question then became, “Have you seen my Noodle?” We were now a little intrigued since we had no idea what that was, or hoped we didn’t.
“What’s a Noodle?” we asked.
“A golf ball,” he replied.
Okay, we know anyone watching us swing a club can spot us for beginners, but really? I think we could have deduced this much. Did he think we believed he’d gone in for a lay-up and lost his basketball? Or perhaps he’d been dribbling down the field and misplaced his soccer ball? Both were ludicrous ideas since aside from this being the wrong venue, the man was sporting a pretty impressive gut and likely hadn’t done any running since high school in 1965.
He finally drifted away, poking at nearby bushes as he went. We resumed out game, which meant we each made at least three attempts before we heard the magical clink of the ball as it fell in. We replaced the flag and headed for the next hole, restarting our conversation on the merits of carpeting versus hardwood floors, and what’s a good place to buy patio furniture. 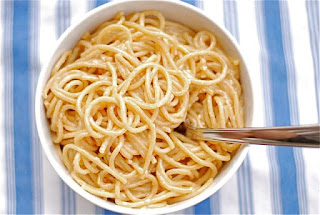 Email ThisBlogThis!Share to TwitterShare to FacebookShare to Pinterest
Labels: golf