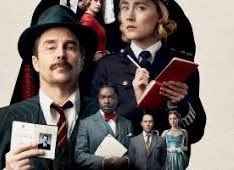 Our weekend began Friday, with a trip to the movies.

We went in the afternoon to avoid any evening rush, but also because we planned to have dinner out afterwards. Before paying for our tickets, we were confronted with a screen showing the seating in the theater. We were instructed to select our seats, ‘To avoid the crowds’ according to the young lady behind the counter. With only one other set chosen, according to the graphics, it looked like we were safe.

Sure enough, there was only one other couple there at 5:00.

We went to see “See How They Run”, a mystery/comedy based on a staging of Agatha Christie’s play “The Mousetrap.” It was chock-full of familiar faces, and along with its farcical take on the British mystery genre, we enjoyed the time period, the inside jokes, the lush staging.

Our big dinner out was at a member of the Chili’s chain, far from fancy, but hey, it was food cooked by someone else. The food was acceptable, but the ambiance was a little trying. We were tucked in our booth, but everyone around us seemed determined to share their lives and conversations with the rest of the restaurant.

Saturday was uneventful, so we made up for that with a festive trip to Costco’s on Sunday, a suicide mission if ever there was one. The worst day ever to go there. Amazingly, thought, we slipped out of there in a timely manner with our Glucosomine, big bags of walnuts and pecans, and a tub of crab dip for later reference. Being wild and crazy, we ate out twice in one weekend, hitting a craft beer spot for lunch, where neither one of us had a beer.

Apparently, our penance for that was the incredibly loud women in the next booth and the under-10 soccer team that was having an end of the year event. The gathering took place in a separate room, but the view from my seat looked into this room, where boys climbed on the furniture, hid under the tables, and crawled on the floor. Soon a game of Not It spilled into the rest of the restaurant.

Meanwhile, My Guy had a different view, that of a table with three dads and three boys. We never fully determined if they belonged with the other crazed group or were perhaps part of an opposing soccer group. All went well there for a while, the boys sitting quietly, immersed in their phones, but that didn’t last. Eventually, French fries tossed back and forth, and at least one boy was standing on his chair.

I managed to hold back the mom, ex-teacher, ex-Girl Scout leader within me.