There’s an odd phenomenon in My Guy’s side of the family.

His mother grew up in the row houses of Philadelphia and much of the family stayed there after marriage. When My Guy was a kid, my father-in-law thought nothing of packing everyone in the car and traveling from Massachusetts to PA for a visit. Nothing unusual there, except he never told anyone he was coming. When asked, he'd say, “Don’t worry, they’ll be there.”

After we were married, my in-laws would suddenly appear on the doorstep on a Saturday morning. I’d scramble to find something to serve them while wishing I’d vacuumed the day before.

At least my husband’s parents lived the next town over, which made an impromptu visit less weird, but his aunt and uncle lived in Florida. On two separate occasions, there they were at our front door without a word of warning.

This morning My Guy was just cutting into his French toast and I was lifting mine off the stove when his phone rang. It was his cousin Susie, who has been living in California for the past 40 years. She wanted to drop off a picture of his father, which she found among her own father’s stuff. Paper under my arm, perfectly brewed cup of tea and warm breakfast in hand, I headed to the porch, thinking okay, maybe she plans to stop by tomorrow.

Nope. She was calling from her car and rang the doorbell at 9:30 a.m. Having only met her twice in my life and fed up with this family quirk, I gave myself permission to hide out and eat my breakfast in peace before greeting her.  She stayed for an hour and a half. I did not serve coffee.

We received some other, more fun, visitors today: 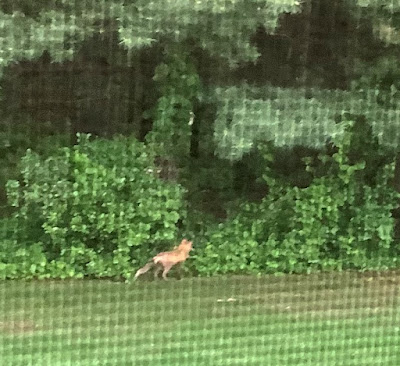 A fox cutting through the back yard 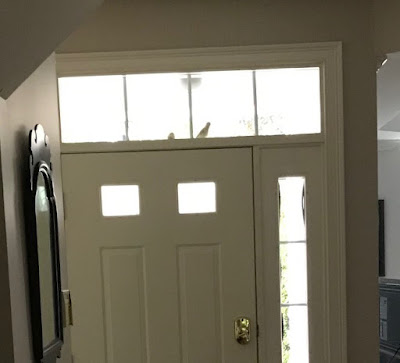 And two silly little birds peeking in the transom window over the front door.