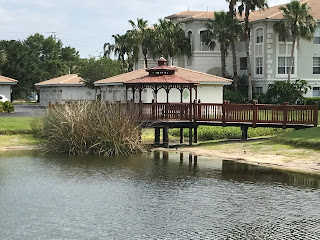 I woke up to the sound of voices and pounding feet outside the bedroom window – surprising because all that’s back there is three feet of lawn bordering our evaporating lagoon. A squint through the shades revealed two 9-10ish kids, boy and girl, galloping off like Paul Revere to wake up more residents, while throwing sand at our sweet little moorhens and moorhen babies who were pecking for breakfast on the shore. Visiting grandchildren, no doubt.

I shuffled into the kitchen to turn on the kettle and saw through the sliders to the porch that they’d now reached the bridge, next to which is patch of grass where the nests are. Not content with ripping up grass and throwing it down, they next ran around and under the bridge. While hoping they were really fascinated with nature and not the devil’s spawn, the thought of “where is our gator when we need him?” did cross my mind.

I almost threw on my clothes to stomp over and investigate, but instead opted for the Zen of proofing yeast and then kneading dough for some bread I’m contributing to a meal later today.

Except the soothing repetition of kneading was shattered by an NPR interview with Anita Hill discussing the treatment of Ketanji Brown Jackson at the hands of the feckless Republicans.

Radio off, one last push and fold, dough into the greased bowl, and in an hour or two I’ll have plump and satisfying dough to braid, raise, and bake. 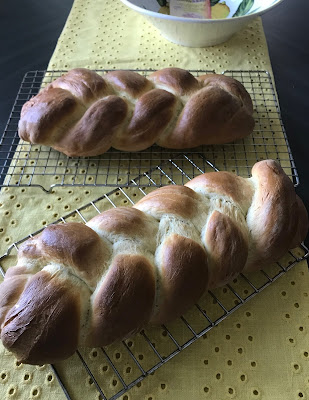 Thank heaven for bread.
Posted by Marty at 7:52 AM