My week with the grandboys went swimmingly.

As predicted, they mostly just zipped in and out of the house on their way to school, work, friends, and football. I held up my end by making sure they ate and slept. The rest of the household was another matter.

My daughter has the sweetest cats on the planet. Stranger and family alike, they throw themselves in your lap at the first opportunity.  After several years catless, I’d forgotten the mixed pleasure of having someone “help” you work at the computer and read the paper. 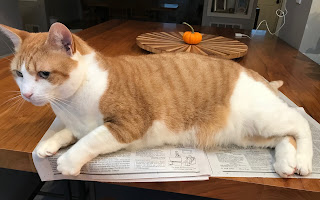 After three tries of peeling 18 pounds of cat off of my newspaper article, I gave up and left Marvin sprawled across two full pages of the Wall Street Journal.

Mamie sleeps through the night with barely a rattle of her collar and only the occasional quiet bark at the rabbit in her dreams. Marvin and Dusty, being card-carrying cats, rev their engines promptly at 3:30 a.m. every night. 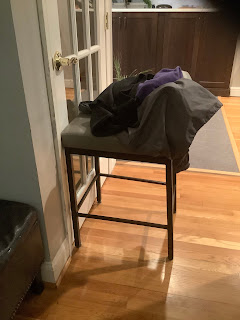 So, every evening Marvin gets packed into the basement with a heavy chair braced against the door since he knows how to turn the handle. Dusty, being less forceful, is allowed to sleep upstairs.

Except after my first night. Nothing like being jarred out of sleep before dawn by Dusty’s tiny but piercing “eeep?” . . . .“eeep?”. . .  “eeep!!” Marvin had a bunkmate for the rest of the week.