Last night, while watching yet another episode of Line of Duty (an excellent British series we’ve recently discovered on Amazon Prime), I became distracted by the body language of two of the characters.

Martin Compston plays good guy Steve Arnott and is 5’8”.  I imagine he’s long gotten over his nearly below-average size and is perfectly comfortable in his body. In an earlier life he’d been a professional British footballer and even had a sturdy enough ego to star in a series called The Wee Man. 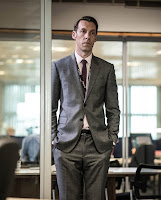 Craig Parkinson, an actor who I’ve recently seen playing psychopathic twins in another excellent series, Whitechapel, often projects a quietly menacing aura. In Line of Duty he plays corrupt copper Dot Cotton and looms over everyone in the show at 6’5”.

In this particular scene, both were sitting in the squad room staring at computers, but the difference in the way they used their space was interesting.

Compston’s arms were spread across the front of his desk and he sat back, using the whole area around him, while Parkinson’s manner was that of a praying mantis, his long arms tightly compacted by his sides, his even longer legs tucked beneath him.

As I watched, I wondered how much of this was role playing and how much of it was innate in these two men who over their own lives had learned to adapt to the world around them so differently.